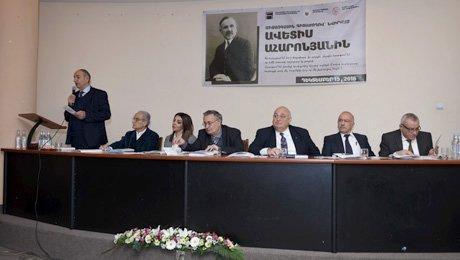 Yerevan State University President, Aram Simonian and Chair of the Central Executive Board of Hamazkayin Armenian Educational and Cultural Society, Meguerditch Meguerditchian made the opening speeches. Diaspora Minister Hranush Hakobyan's welcoming speech was read to the participants of the Conference.  "A. Aharonian is one of those national figures who perpetuated the Armenian people. He symbolizes our huge national potentialities, but unfortunately, the circumstances have always kept him far from his people's life. The important mission of this conference is to ensure the national figure’s complete return to his people", said the minister.

Armenia's Minister of Education and Science Levon Mkrtchyan’s message was also presented to the participants of the conference.

The speakers of the conference were scientists from Armenia and the Diaspora. The first session started with the report of Serzh Srapionian, Candidate of Philological Sciences, Deputy Minister of Diaspora. In the report entitled ″Avedis Aharonian as Person, Citizen and Writer", the author thoroughly gave the great Armenian's human characteristics and described his civic personality. In his speech, Professor also offered to publish Avedis Aharonian's complete collection of works and name a school in Yerevan after his name.

Doctor of Philological Sciences Vardan Devrikian's report was entitled "Folk Legends in Avedis Aharonian's Stories". He noted that Aharonian's hometown Surmalu province is situated between the two of our greatest symbols - the Araks river and Ararat Mountain, which predestined the writer's political and  social worldview.

Master of Philosophy Haroutiun Kurkjian (Greece) presented the topic "Aharonian as an artist-ethnographer-historian of All Armenians," mentioning that the Armenians of Diaspora consider him as such.

The report "Avedis Aharonian’s Political Dictionary", made by Candidate of Historical Sciences, Hovhannes Zatikian, concluded the conference. In this report, the author declared Aharonian as the forerunner of Armenian diplomacy. According to Zatikian, Avedis Aharonian’s letters to the Catholicos of All Armenians should be studied separately.

At the end, Q&A section started. The purpose of the conference was to appreciate Avedis Aharonian once again as a person, writer, poet, political and public figure, and diplomat, to introduce him to his people, and praise the first advocate of independence in Armenia.

You can read the opening speech of the Central Executive Board Chair Meguerditch Meguerditchian here. 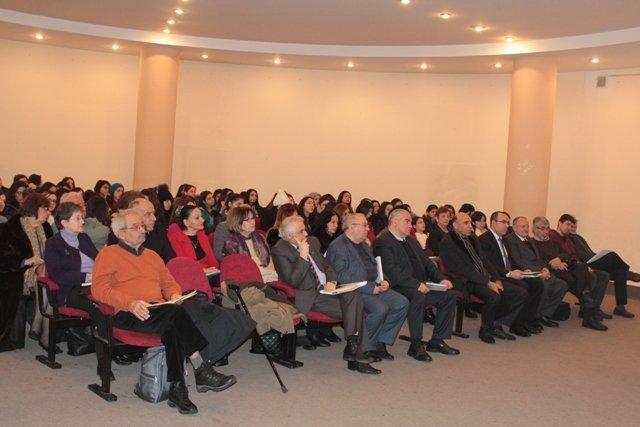 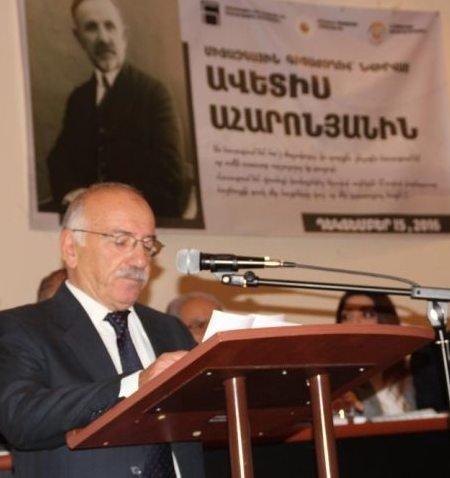