Song and music have been flowering rings in the culture of the Armenian people, all the while warming hearts and raising spirits. The Zvartnots Choir, directed by Kayane Simonian Derian, accompanied by Ruzan Barsumian on piano, held performances on April 16 and 18, 2021, at the K. Esayan Hall in Aleppo. The event was held under the auspices of Bishop Masis Zobouyan, Armenian Prelate of Syria, and was organized by the Zvartnots Choir Executive Board, a unit of the Hamazkayin Regional Executive Board.

The Zvartnots Choir has been a gathering place for choral talent and a beacon for the community for a half century.

The program included the most difficult “O Fortuna” by Karl Orff. For this and some other pieces, Ms. Barsumian was joined on a second piano by Lizet Seraydarian, who for many years served as the choir’s accompanist.

Attending the first performance were the prelate and representatives of the Armenian Catholic and Evangelical communities, the Consul General of Armenia in Aleppo, the consular representative of the humanitarian mission of Armenia, member of the Syrian parliament Jireyer Raasiyan, representatives pf the Hamazkayin and Homenetmen Central Executive Boards and of Aleppo-Armenian cultural, benevolent, compatriotic, athletic, and educational organizations, along with the music-loving public.

The concerts started with the national anthems of Syria and Armenia. Rita Gaghian gave an opening address in Armenian. She said, “In the difficult days of history, Armenian songs and music have kept Armenians company. They have expressed the suffering of our fiery spirits, our faith, our love and sadness. Hamazkayin, as a conservatory of culture, well aware of the educational role of art, and especially song, dance, and music, has taken ownership of our lofty national values, and presents them on the stage with taste. For half a century, the Zvartnots Choice has maintained a special place in the life of Aleppo Armenians. It has made generation after generation aware of not only Armenian but also non-Armenian and classical song.” 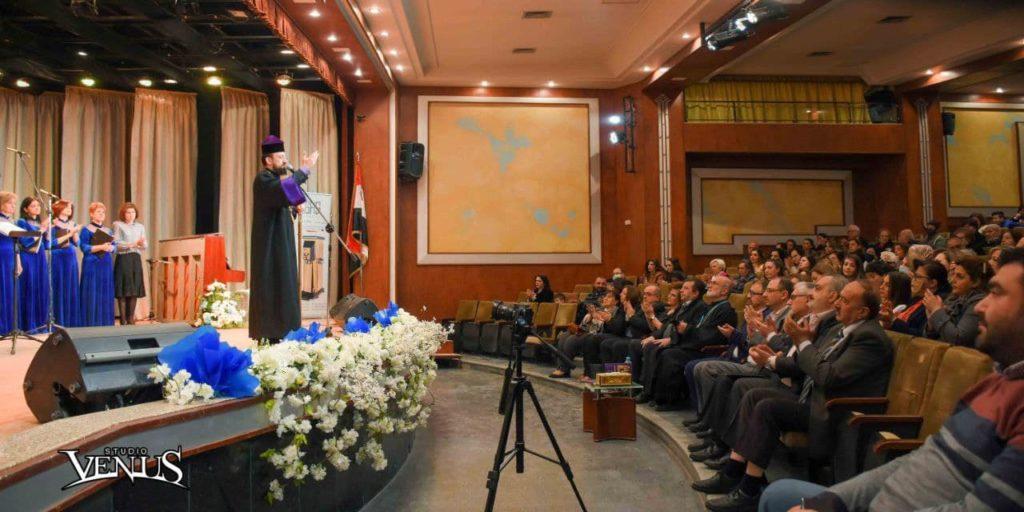