On the evening of April 9th, 2017, Hamazkaine Nairi Dance Group held a special performance celebrating the origins of Armenian Dance. The production was dedicated to the 25th Anniversary of the Republic of Armenia’s brave Armed Forces, in honour of the memorial Month of April.

Held at The Riverside Theatre in Parramatta, this highly anticipated event was produced by the gifted partnership team, and our guests from the Barekamutyun State Dance Ensemble in Armenia, Baron Hrachya Badalyan and his wife Dikin Anahit Badalyan, in Collaboration with Nairi Dance Group’s very own Creative Director, Choreographer and Mentor, Baron Asadour Hadjian.

With careers spanning over 4 decades, the renowned Badalyan duo began dancing professionally with the Yerevan and Armenia State Dance Ensembles respectively, then moved to the famous Barekamutyun State Dance Ensemble, touring the world as lead dancers and soloists.  This vast proficiency culminated in their current roles at the latter, as Head Choreographers and Teachers for the next generation of Ensemble dancers. These virtuosos are classically trained, and decorated with the highest academic qualifications within The Arts, Dance, Theatre, Staging and Choreography industries. Parallel to their professional roles on and off the stage, the Badalyans have also been involved in Armenian community dance groups abroad.

Now they have returned to Sydney to continue their mission; to preserve Ancient Armenian Dance styles with the hope that each will be passed on and taught to future generations. This dedication to the cause was evident at the inaugural concert where over 100 performers of varied ages and experience levels showcased their passion and Armenian pride.

The dances were set against an Audio/Visual treat for the senses, as the audience was taken on an interactive video journey through the ages. Both educational and abstract, the narration and short clips travelled back to the different eras of Armenian history, where each video was connected to a series of dances.

The show opened with the introduction of the mythical founding father HAYK Nahapet, through to the significant Kings of the past who civilized and developed Armenia into a powerful Kingdom. Then, the video accompaniment moved onto the era of enlightenment and faith, followed by the age of Renaissance… displaying the creation of the Armenian alphabet and advancements in philosophy, science, poetry and literature.

The most poignant theme of the evening was the remembrance of the Armenian Genocide which honoured the 1.5 million lives lost and their 1.5 million unobtainable loves, hopes, and dreams. The key message throughout the narration was that no matter where in time you return, the Armenians have always survived, despite the ongoing brutal battles that have continuously been fought to defend the land and its people. These battles have irrevocably shaped the antiquities and the landscapes of Armenia and continue to do so with the most recent tragic conflicts in Artsakh. The final video payed homage to this and to Mount Ararat, as the silent witness, to the past, present and future Armenia. These powerful scenes had the viewers captivated and moved, particularly when combined with the opulence and richness of traditional hand sewn folk costumes, effective lighting and musical compositions by some of Armenia’s iconic composers such as Komitas.

The dances themselves were naturally the main highlight. The teachers and troupe demonstrated their versatilities in choreography and dance styles, ranging from traditional folk, classical, contemporary and more… These included celebratory group circle dances such as ‘Papouri’ (Senior Group) and ‘Tsakhghatzor’ (Junior Girls), as well as specific regional dances such as ‘Sasna Bar’ (Children’s Group) and patriotic dances like ‘Es Im Anush Hayastan’ (Junior Group) and ‘Haykakan Bareru Sharan” (Senior Group).   The traditional women’s ‘Naz Bar’ (Grace Dance) was ethereal and truly portrayed the beauty of this unique, elegant form. ‘Kilikia’ & Vagharshabat performed by the Senior Girls were of a significantly high calibre; While the strength, endurance and uniformity of the men’s dances were captured by the hypnotizing ‘Alshkerti Kochari’ and the formation of the ‘Bert’ (Fort - symbolising the might of our forefathers) in the ‘Haghtakan’ dance.

The scope of the more modern styles was displayed in evocative and haunting female Solo performances, where the classical ‘Kroong’ (The Crane) brought to life the iconic Armenian national bird, personifying migration and the Armenian Diaspora.

In summary, each choreography and dance had a fullness of imagery and depth, and judging by the awe inspired gasps, tears, applause and standing ovations, the audience was incredibly moved and inspired by this epic production.

The evening concluded with reverence and a flag procession to the anthem of the Armenian Armed forces. The heroic young fighters from the victorious battle of ‘Shooshi’ were praised in the closing ceremony. This Finale although not a dance, was a patriotic representation to show, that on the stage and in the Arts, our Armenian youth can stand proud and fight for recognition and cultural identity, just as our Armenian Armed forces continue to fight for our land and people.

Congratulations go out to the entire Hamazkaine Nairi Dance family! 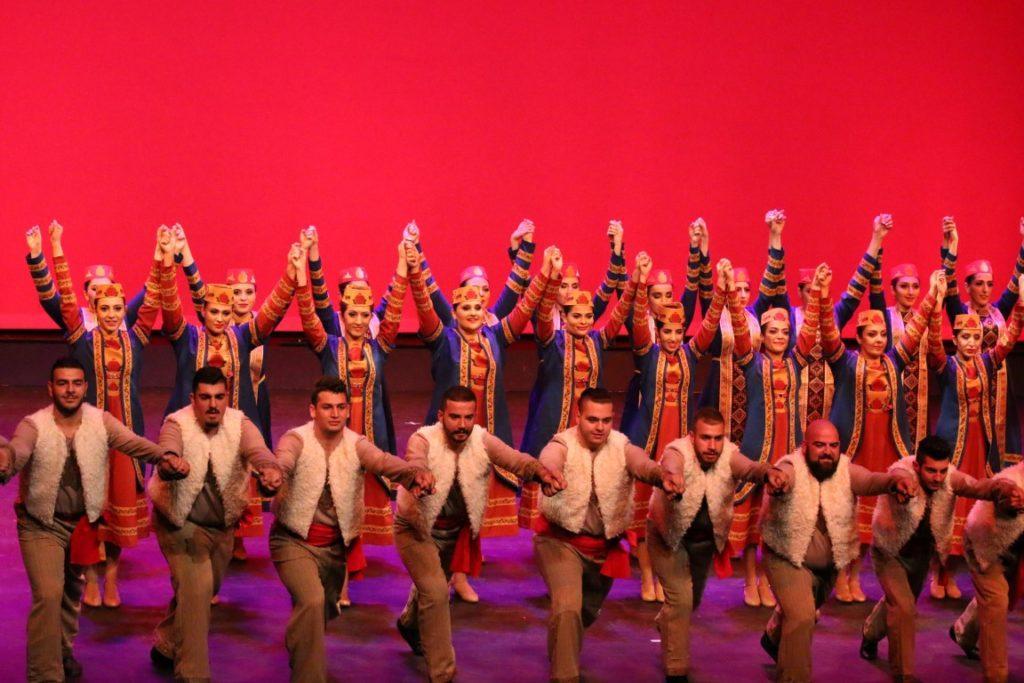