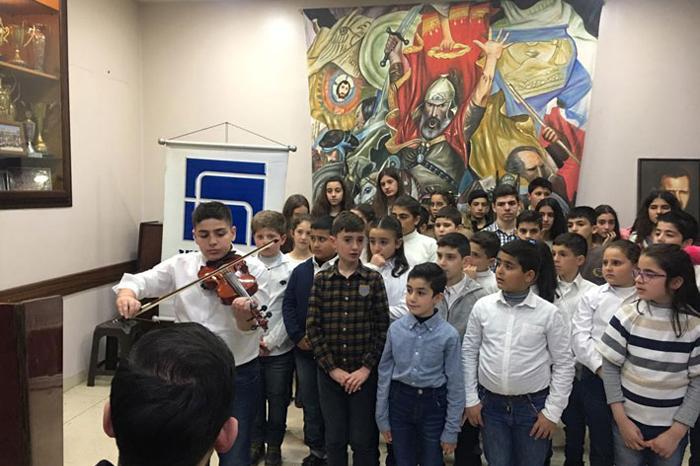 Under the auspices of Bishop Masis Zobouyan, Armenian Prelate of Syria, Hamazkayin’s Levon Shant chapter on February 21, 2020, organized an event to commemorate the Battle of Vartanank. The event was held at the Aharonian Center.

A member of the chapter executive board, Maral Katklian, greeted all those present, and said that Vartanank is one of the most important national-religious celebrations of the Armenian people.

She added that proudly remembering is not enough to guarantee the survival of the Armenian nation and church; we must become the worthy heirs of the heroes of Vartanank, conscious of the value of our identity, loyal to our Christian faith and patrimony, keep the Armenian language pure, tell our stories and reproduce our culture, and pass them on, generation by generation, as traditions and holy relics.

The artistic program followed. The prelate then spoke from his heart, saying that the Battle of Vartanantk was a heroic battle for the Armenian people, where Armenian heroes fought to protect Armenia, the language, and the culture. He gave high praise to the students, whose songs and recitations are keeping the spirit of Saint Vartan alive.

The bishop connected the victorious path of Vartanank to the latest victories in Syria, especially the complete liberation of Aleppo, emphasizing that when there is willpower, vision, loyalty, and a willingness to sacrifice for the homeland, that is the moment when all liberations occur. He emphasized that the year 451 is a cornerstone in Armenian history, a stone that crushed all efforts to alienate Armenians and the treaty that emerged in 484 guaranteed the freedom of conscience of Armenians and the independence of Armenia.