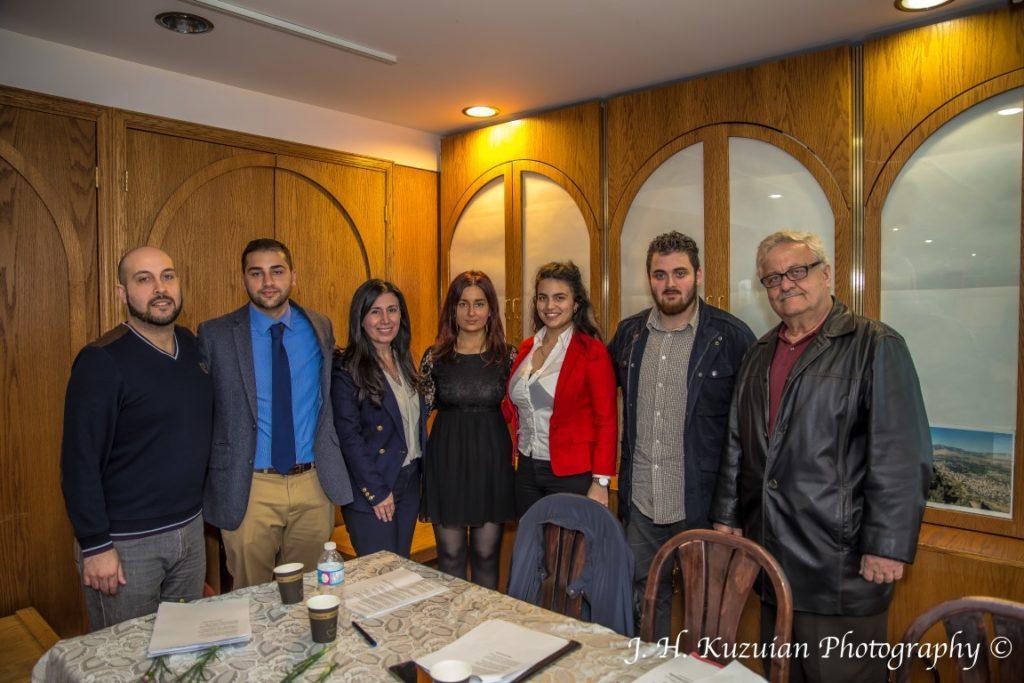 Speaking, communicating and creating in the native language seems very ordinary for many peoples, because their generations learn and hear their mother tongue since their birth, study every sound and word of it in the language of their ancestors. Their mentality and logic develop in the language they speak, comprehend and gradually master.

The true fact is that in the 21st century the greatest challenge for an Armenian in the Diaspora, for which he makes every effort, is the preservation of the Western Armenian language and its correct usage․

The event aimed at this issue took place on Sunday, 1 May 2016 at 2.00 pm at the Armenian Center’s "Y. Manoogian" Library. The gathering, organized by the members of "Book Club" of the Hamazkayin Armenian Educational and Cultural Society, was dedicated to the Armenian lyric poetry.

The participants of the event were the representatives of the young generation, whose parents, though living in foreign countries and often rowing upstream, could convey the spirit of the Armenian literature and its essence to them.

After the welcome speech, Tamar Donabedian spoke about the situation of people facing crisis in Aleppo and Artsakh. She highly appreciated the life and death struggle of the Armenian soldiers fighting on the border of Artsakh. Then, she invited Varag Mesrobian and Christopher Kostanian to the stage. After a brief speech made by Varag, the boys performed the song "My Brother and I", which encouraged and impressed the audience.

The audience followed the slideshow accompanied by a brief introduction about the Armenian poetry. Tamar Donabedian presented clear and concise descriptions and history, noting that the poets’ personal experience of love, hatred and nostalgia dominate in their poetry, and very often are hidden in the footnotes. Then she quoted the poems of the lyrical writers and performed Teryan’s "Sadness".

Book Club’s fresh member Lana Der-Bedrossian’s participation was especially encouraging and inspiring. After presenting Matevos Zarifian’s brief biography and work, she read the writer’s "Will", "The Mountains of my Dream" and "Little Girl".

The next participant was Arpi Agelian. She presented the lyrical poet Durian, after which reciting one of the most famous poems of West Armenian poetry by Durian "The Pond".

Sevag Harutyunyan presented the East Armenian lyrical poet Yeghishe Charents and read some excerpts from the writing "The Great Figures about Charents". Then he performed the song "I Wish Zurna Blew Now" in a very confident and impressive style.

The guests enjoyed Aren Mnatsaganian’s impressive interpretation of "The Girl Like a Lampshade" by Charents, after which he presented the biography of the poet from Toronto, Ruben Mnatsaganian, and read his poem "Sunset”.

Tamar Donabedian presented also one of the greatest representatives of Armenian lyrical poets Hamo Sahian. In her speech, she spoke about the poet’s delicate and sensitive inner world, which is also universal.

Tamar also presented Sahian’s popular poems "When Saying Armenia" and "How can I leave?", which highly impressed the audience.

At the end, the Literary Committee presented books to the participants as an expression of gratitude for their work. After the appreciation speech, the conductor of the event encouraged the guests to sing in chorus the "Love Song" by Metsarents. 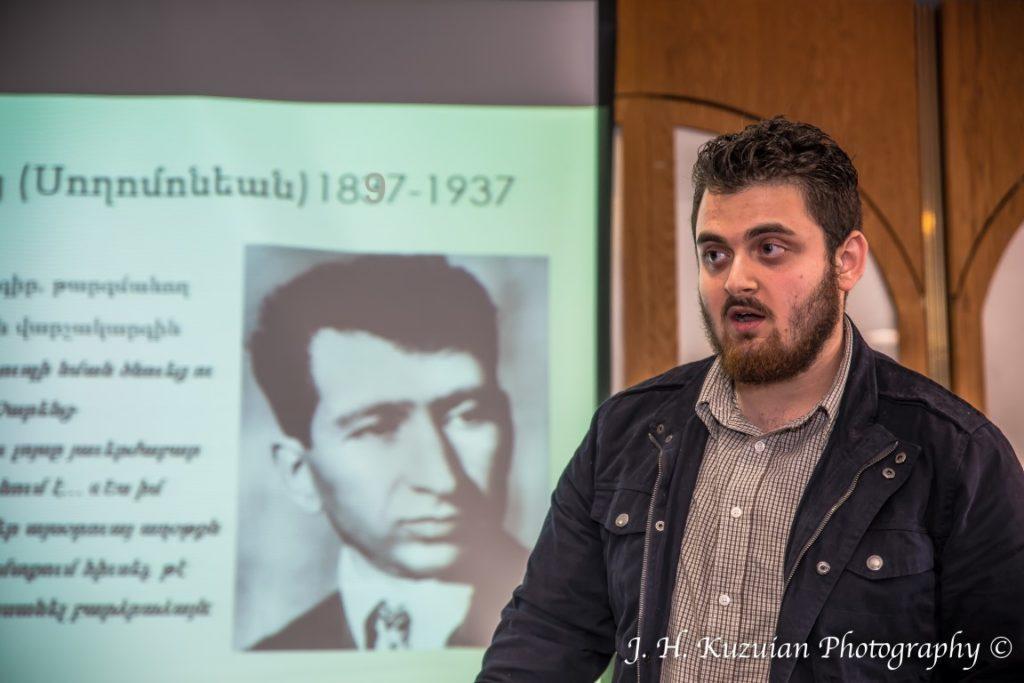 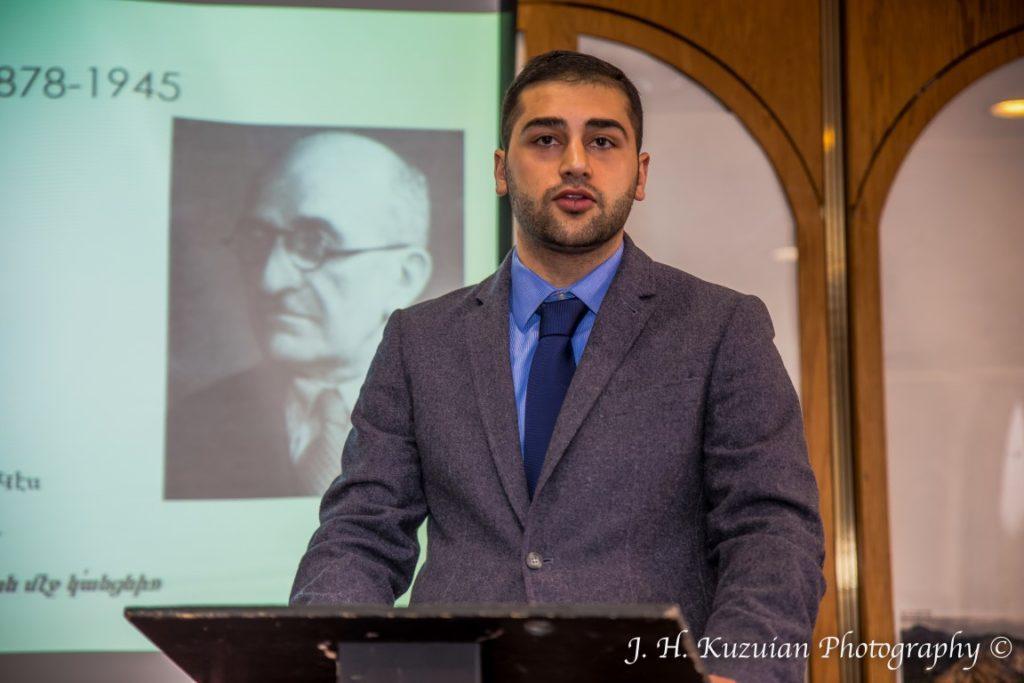 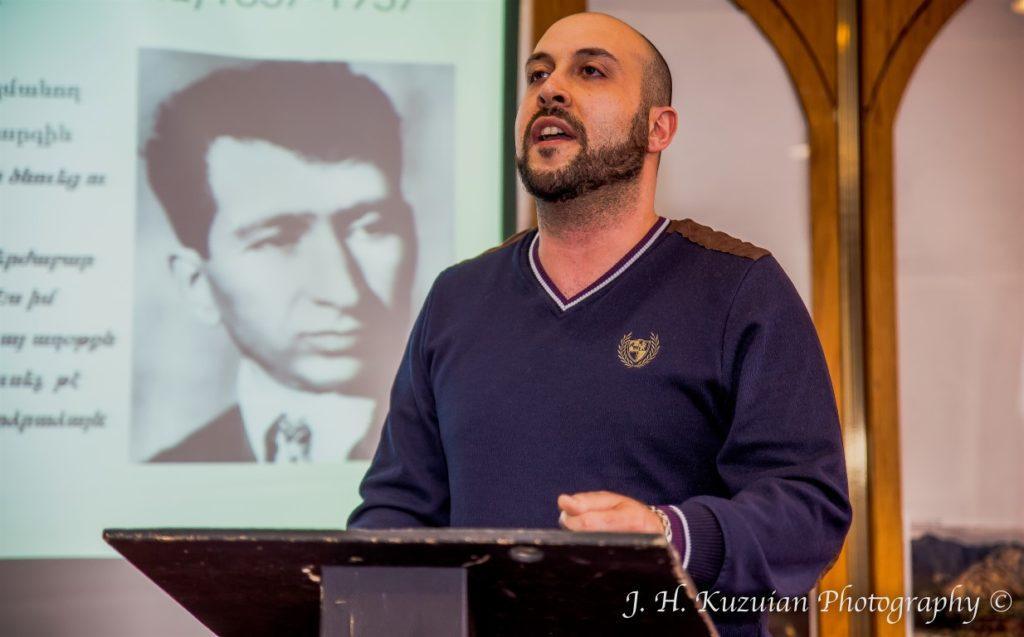 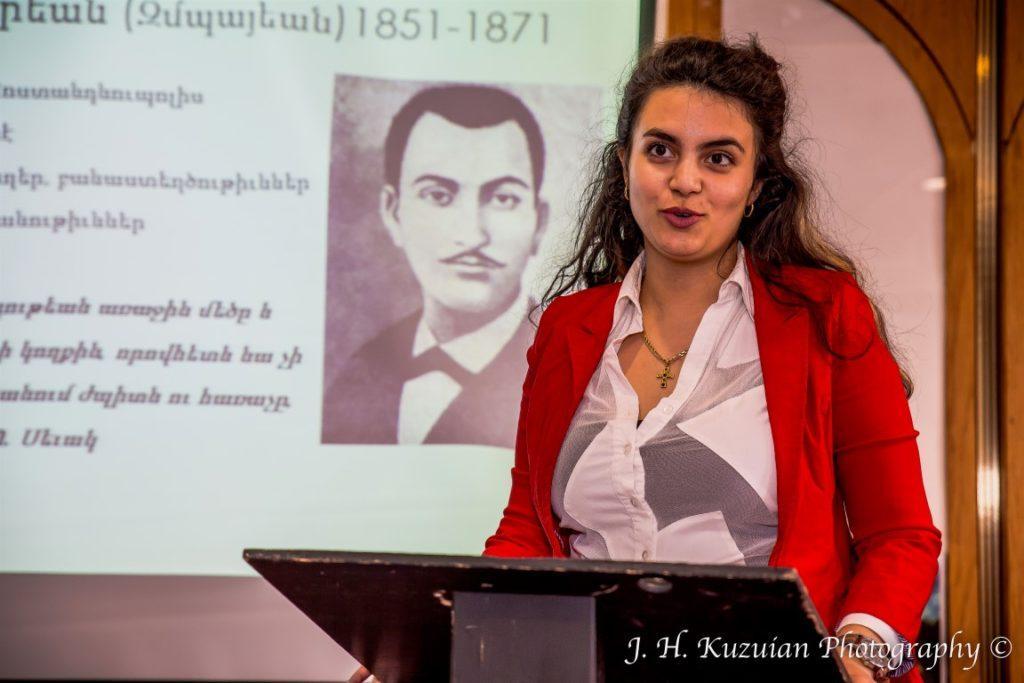 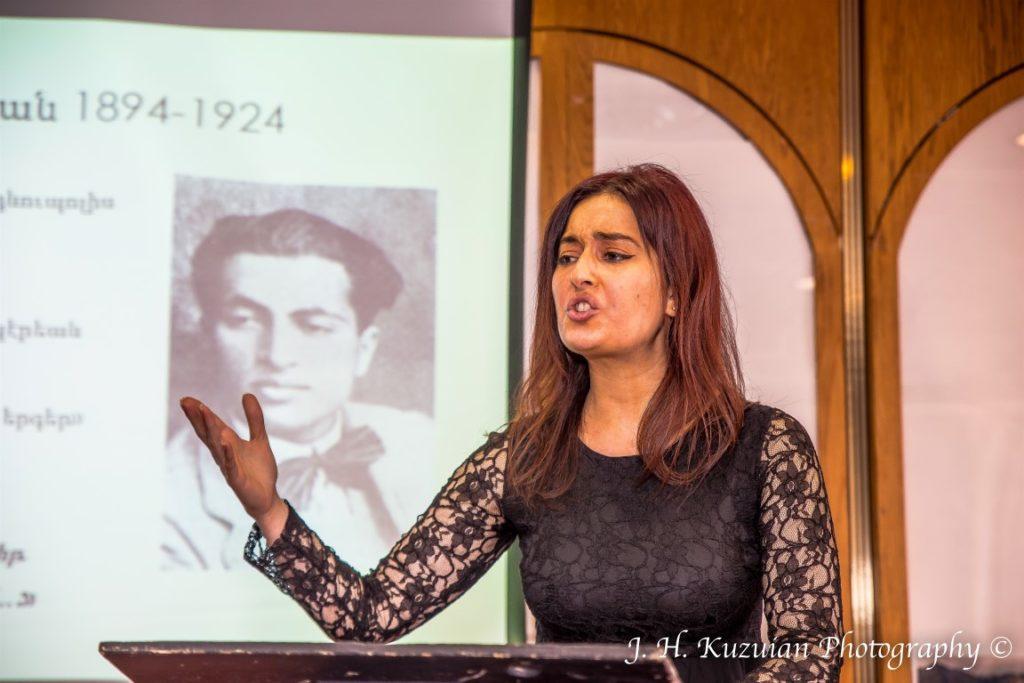 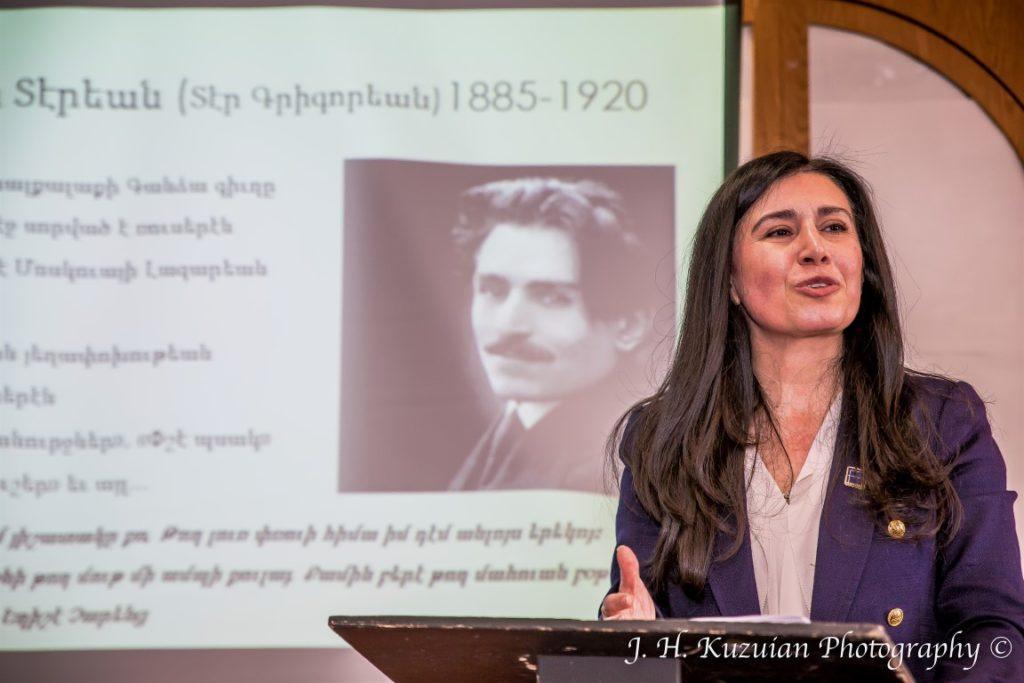 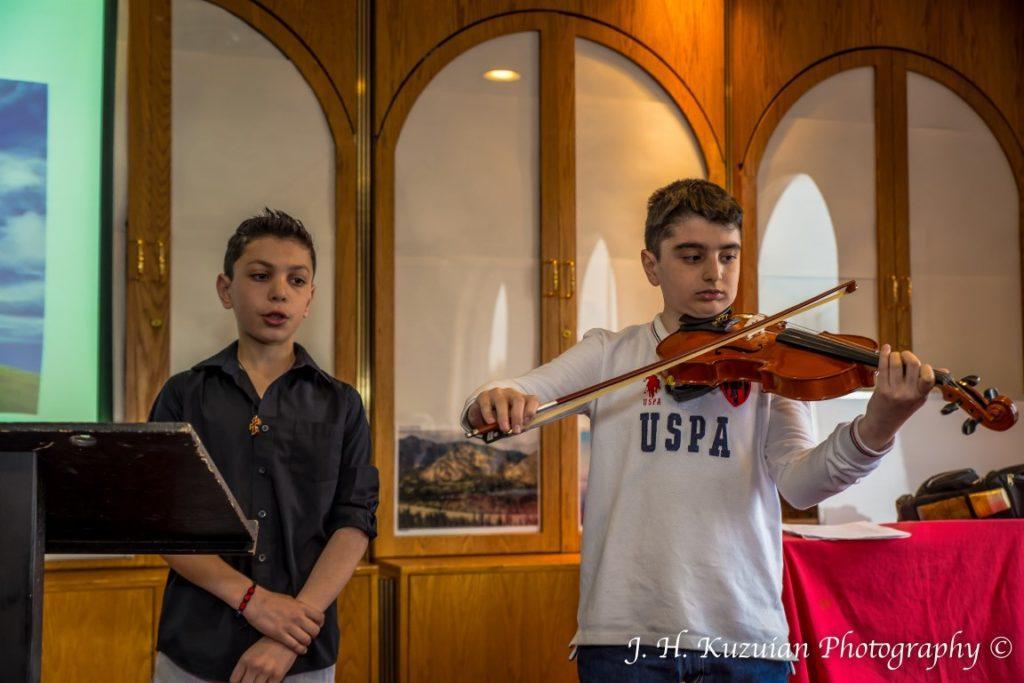 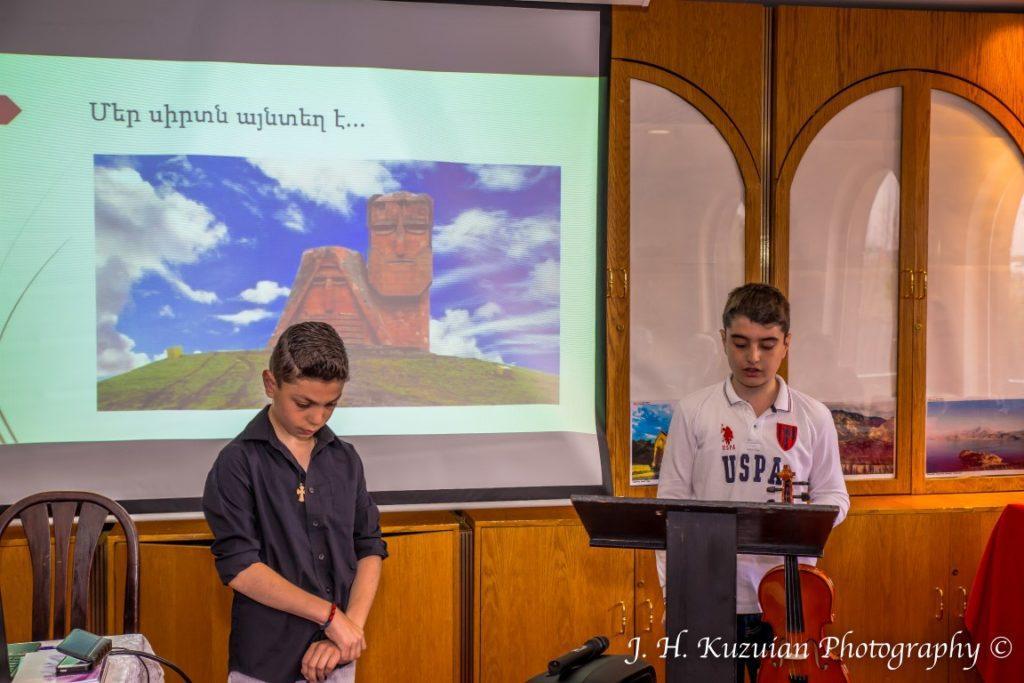 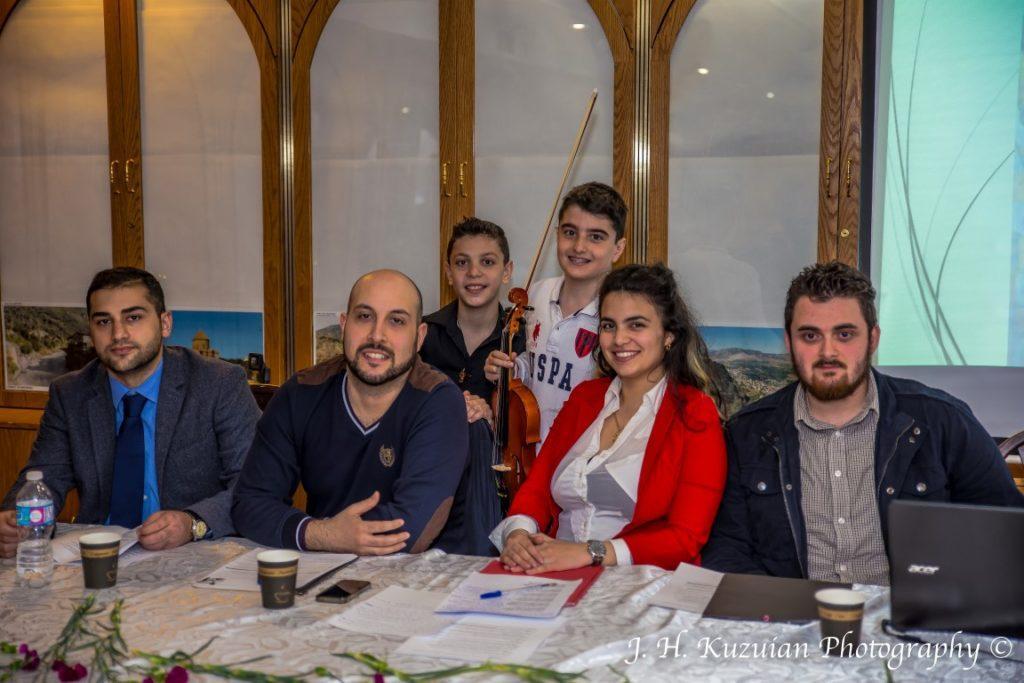 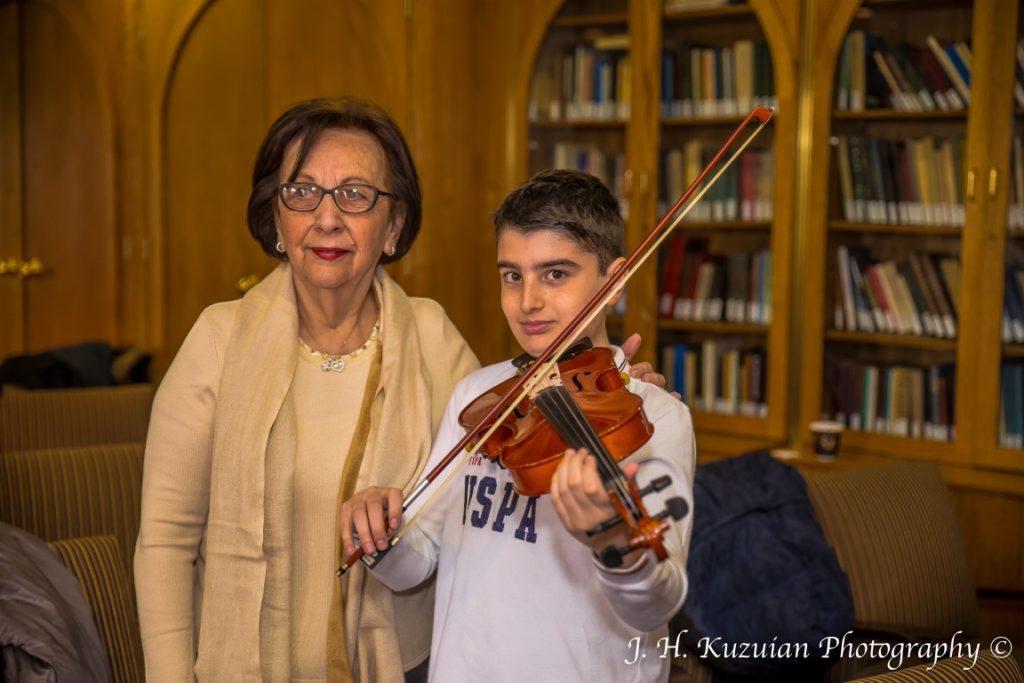 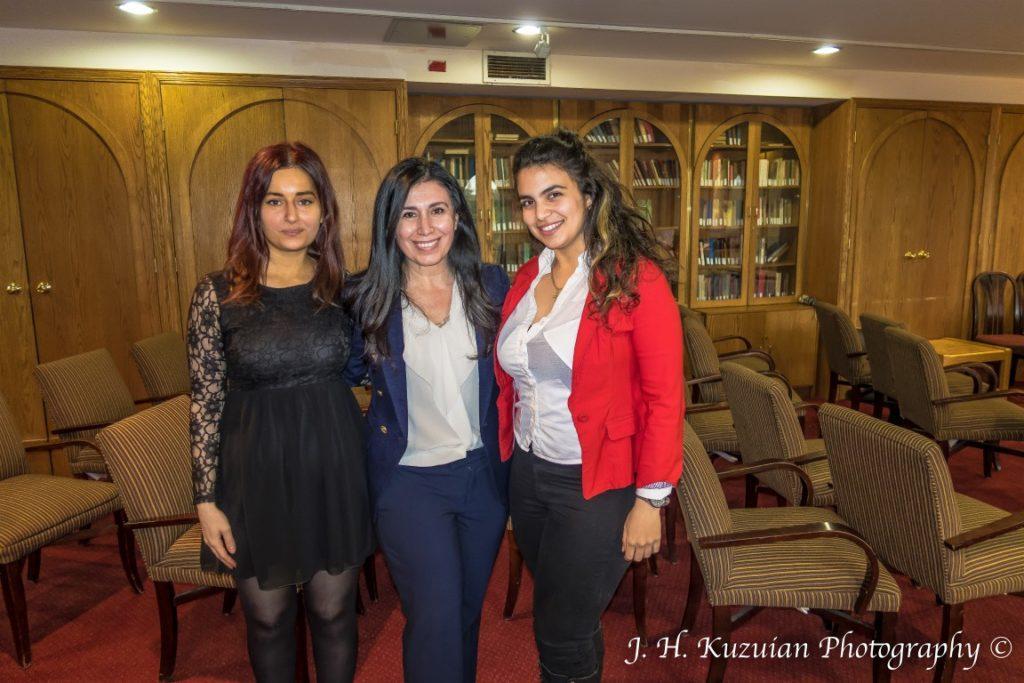