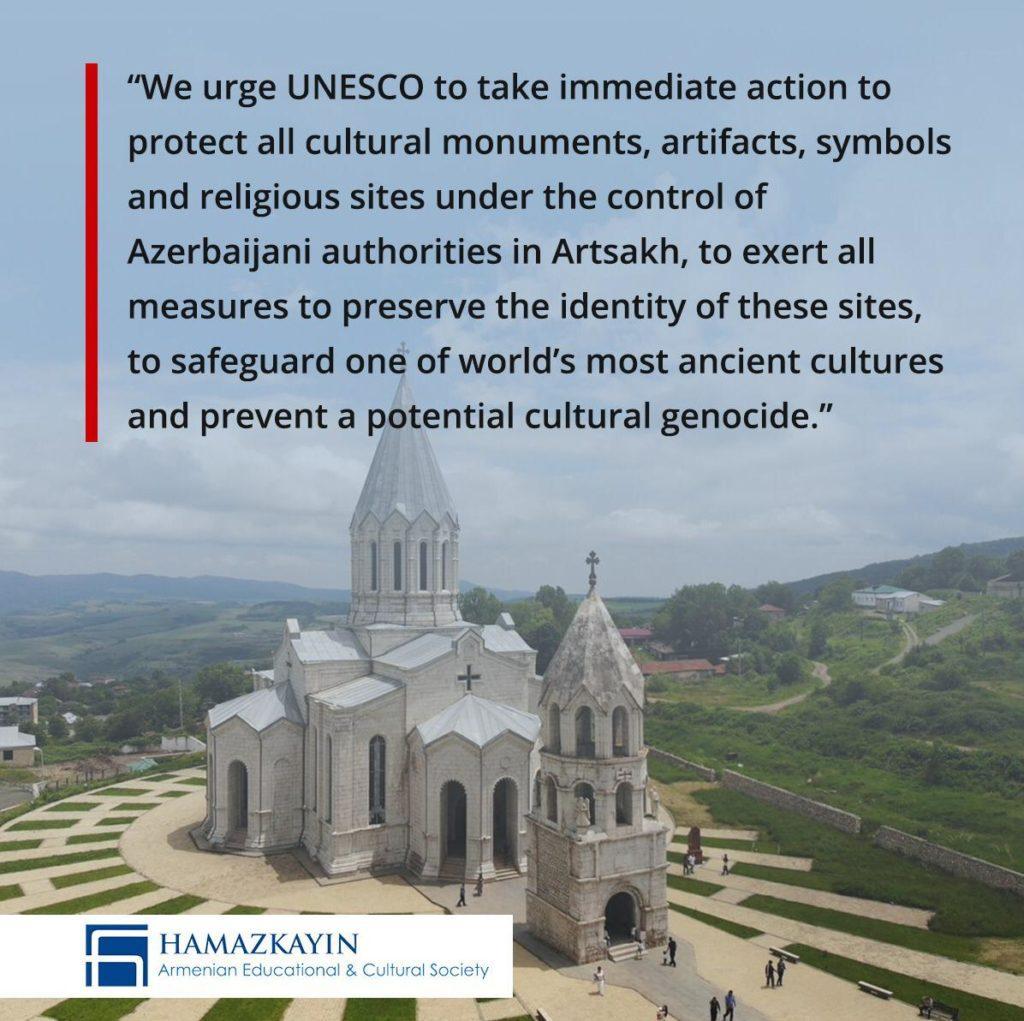 The aggressive war waged by the government of Azerbaijan on Artsakh (Nagorno-Karabakh), backed by Turkish forces with the participation of thousands of terrorist mercenaries, threatened native Armenians with ethnic cleansing and endangered the Armenian cultural heritage of Artsakh through the intentional destruction of cultural and religious sites.  The implementation of the recent agreement between the representatives of Armenia, Azerbaijan and Russia that brought the armed conflict to a halt, will place thousands of Armenian cultural and religious sites, ancient artifacts and symbols under the jurisdiction of the authorities of Azerbaijan.

The Azerbaijani government has a documented history of conducting systematic erasure of Armenian heritage. Over decades, the Azerbaijani authorities have demolished all traces of Armenian history and heritage in the region of Nakhichevan, including the medieval cross-stones of Djulfa and the Saint Thomas cathedral of Agulis which was founded on one of the oldest churches in the world. In fact, during just one week of occupation of Artsakh, numerous instances of evidence emerged on the destruction of cultural monuments and the vandalism of Armenian churches and religious symbols. This is accompanied with announcements by Azeri officials falsifying the cultural history of ancient Armenian monasteries, such as the 9th century Dadivank monastery, through forging fictitious names for its churches and denying its Armenian identity.

As a cultural association with worldwide representation and active presence for more than 90 years in the Armenian cultural life, the Hamazkayin Armenian Educational and Cultural Society is severely alarmed by the ongoing destruction of the cultural heritage of Artsakh and the desecration of Armenian religious sites, ancient cemeteries and cross-stones.  We are equally concerned that with the loss of ancestral land and the ensuing forced migration of the native Armenians from Artsakh, a prominent threat is posed to the loss of an ancient Armenian dialect mainly spoken in that region as well as to traditional customs and a rich indigenous heritage.

As a signatory to the World Heritage Convention, Azerbaijan has legal responsibility as a State Party to protect and conserve the world’s cultural heritage. This is a commitment that the government of Azerbaijan has made to the international community. Purposely obliterating the cultural identity of the indigenous Armenians of Artsakh constitutes a grave crime and puts humanity’s collective culture at risk. As the global organization with the ultimate responsibility of protecting world heritage, we urge UNESCO to take immediate action to protect all cultural monuments, artifacts, symbols and religious sites under the control of Azerbaijani authorities in Artsakh, to exert all measures to preserve the identity of these sites, to safeguard one of world’s most ancient cultures and prevent a potential cultural genocide.