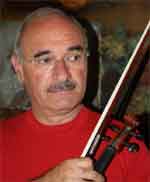 Born in Yerevan, Armen Jenderejyan received his musical education at the musical schools of Tigran Choukhajyan and Tchaikovsky, as well as at the Komitas State Conservatory. While still a student, the young violinist accepted the position of the vice conductor for the First Violinists’ Orchestra at the State Orchestra of Radio and Television. He remained in this position for 20 years. In their school years, together with his brother, Ashot, he founded the Jenderejian Duet, which is the only one in Armenian reality. The duet gave countries in many countries. In 1992 he accepted the invitation of the world renowned conductor Emin Khachatryan to study the art of music conducting. In 1997, Armen Jenderejian graduated from the Department of Music Conducting at the Conservatory, with the highest merits.