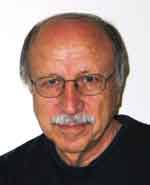 Hrant Markarian is a scientist, playwright, poet, theater specialist, literary critic, director and actor. He was born in Basra, Iraq, in 1938. He received his elementary education at the Armenian National School in Margile, and afterward attended a public high school. He graduated from the Baghdad Science College and in 1962 moved to the United States, where he earned a master’s degree and Ph.D. in chemistry, as well as a master’ss degree in the management of technology. He has been a research scientist and later on, a professor of chemistry at State University of New York. Parallel to earning his Ph. D., he received a theatrical education at the Circle in the Square, New York University, and the Schreiber Studio. He appeared onstage in 1956, in Margil, Basra, Iraq, performing the role of the poet in “The Honorary Beggars,” by Hagop Baronian. He directed his first play in 1958 at the Armenian Boys’ and Girls’ Youth Union of Baghdad; carnival sketches he had himself written. Markarian’s theatrical activities further developed in the United States. In 1967, he founded the Massis Theater Group, which was later renamed the Theater of Hamazkayin. In 2005, he founded the Youth Theater Group of Hamazkayin in New Jersey. From 1985 to 1995, Markarian occupied the position of the editor of the “Varak” periodical. Since 2006, he is a member of the editorial group of the “Pakin” periodical of Hamazkayin. Since 1967 and for 43 years, he has been the director of the New York Theater Group of Hamazkayin. He is the author of 27 plays, 24 of them in Armenian, two in English, and one, in English and Armenian. He has staged 55 theatrical shows. He has performed the roles of 55 characters, one of which in the movie “Assignment Berlin.” He has published seven plays, a book of poetry titled “Crashed by the subconscious,” and “Stone voiced liturgy,” on the occasion of a pilgrimage to Western Armenia. In 2006, following an invitation by the Writers’ Union of Armenia, he prepared for publication the book, “The playwrights of Armenia,” in English. His plays have been performed in the United States, Canada, Armenia, Lebanon, Syria, Greece, and England.