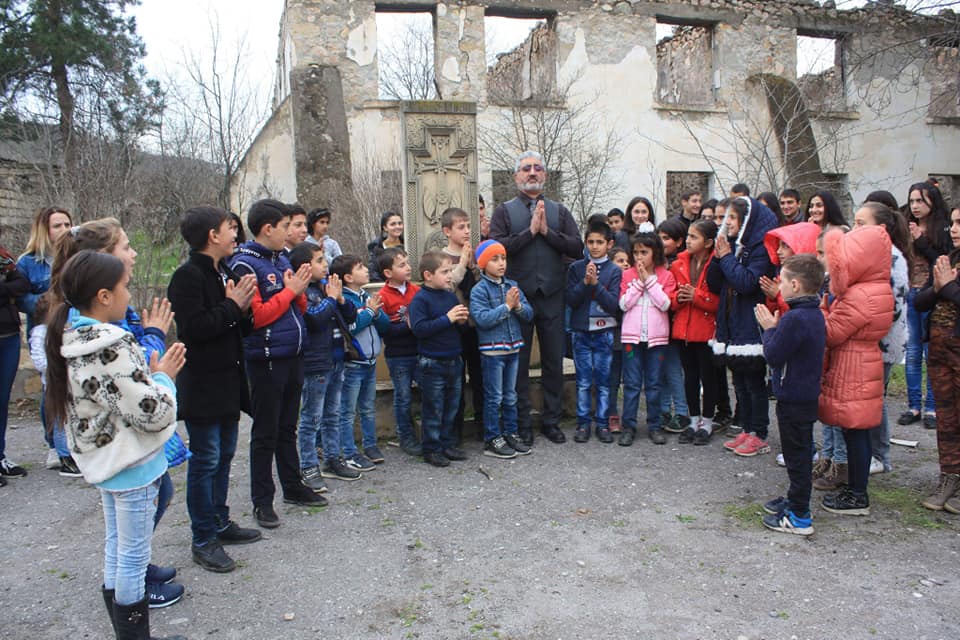 At the initiative of the Artsakh office of one of the creditable organizations of the Armenian diaspora, the Hamazkayin Armenian Educational and Cultural Society, and with the cooperation of the government of the Kashatagh administrative region, the Lebanese-Armenian repatriate singer Kevork Hajian performed in the southern city of Kovsakan.

Kovsakan (Zəngilan) spans the banks of the Voghji River. On the first day, the singer performed on the square outside city hall. He invited children from the nearby towns of Mijnavan, Moush, and Alashkert to participate. Waiting for the concert to begin, I spoke to the singer. He told me the visit and concert were dedicated to Gomidas’ 150th anniversary. He was going to stay in Kovsakan for about a week and work with schoolchildren as well as senior citizens, acquainting them with the works of Gomidas, and teaching them to sing. On March 28, he would hold a concert with his students. He said he had been to Kovsakan a few times and noted that his native village of Ainjar is a sister city of Kovsakan. On September 1, 2018, Hajian was present for the visit of Ainjar mayor Vartkes Khoshian to Kovsakan and participated in the “First Bell” ceremony held for the schoolchildren.

Harut Avanesian, who heads the cultural and youth issues affairs office of the Kashatagh regional administration, greeted those in attendance and presented the singer. Hajian told the audience, mostly children, of the plans for the March 28 Gomidas concert and invited them to join him. He spoke about Gomidas’s greatness and how he was able to collect and preserve Armenian folk songs. “Gomidas too is a soldier maintaining Armenian territory with his songs and poetry,” Hajian said. “Gomidas is Armenia, our perseverance.” He sang Gomidas’s last song, “Aghotk mangagan shurterov” (A child’s prayer). First he spoke the words, teaching the children. Then, by the cross-stone in the public square, they sang together:

Give us, give your grace,

Give life to our mother,

Give life to our father.

Keep us with your right hand,

Bless us with the Holy Cross.

You are our protector.

Next came the song, “Kovagan” (Ode). Hajian emphasized Gomidas’s songs of labor. Gomidas gathered these songs by circulating in Armenian villages and listening to people; he crystalized them into cultural masterpieces. The song “Horovel” he performed with great enthusiasm, explaining the meaning of the words. He sang “Groong,” the song of longing, and spoke of his birthplace—refuge of the survivors from Mousa Dagh and the only Armenian village in Lebanon. These four songs, Hajian said, would be sung on March 28 by the children.

Hajian than proceeded to sing other songs. Parallel to the songs, Kovsakan’s “Tatul” folk song and dance ensemble, under the direction of Karen Martirosian, performed Armenian dances. The concert-masterclass lasted two hours and the children participated and listened with pleasure. After the concert, Mayor Razmik Margaryan and the director of the Tatul Krpeyan High School, Serop Karamyan, decided that the classes should be held in the school. 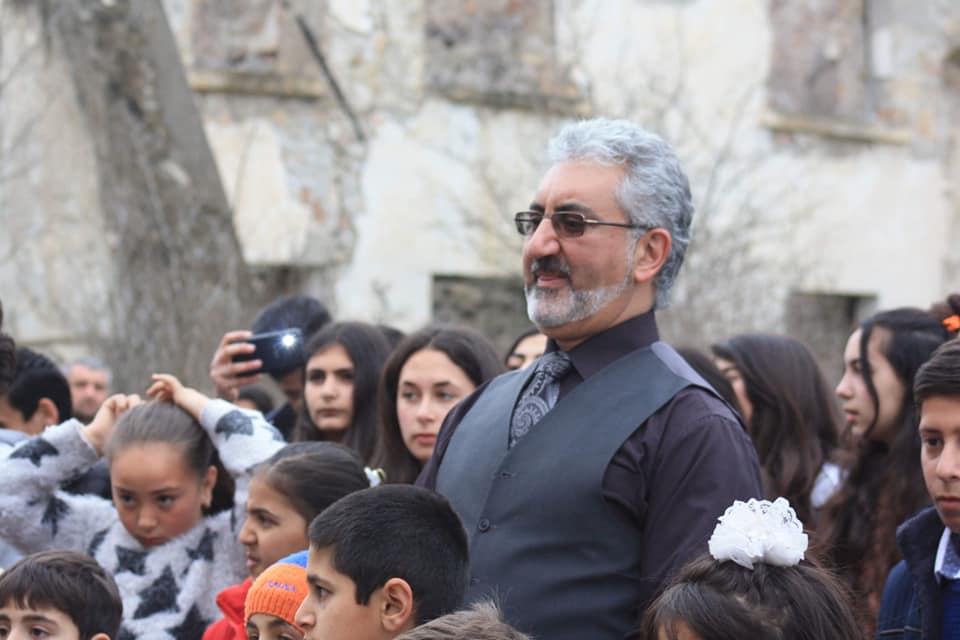 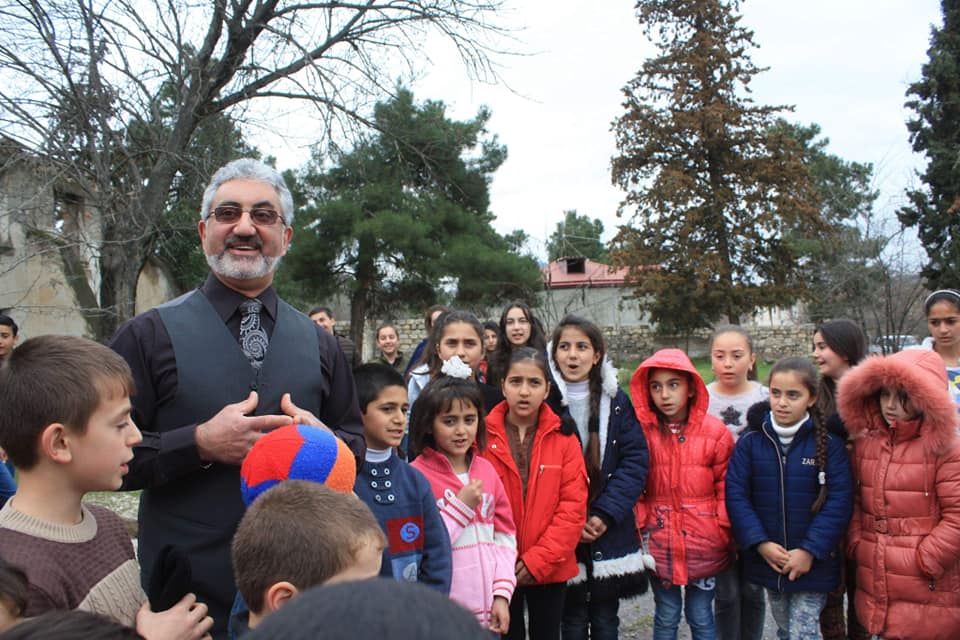 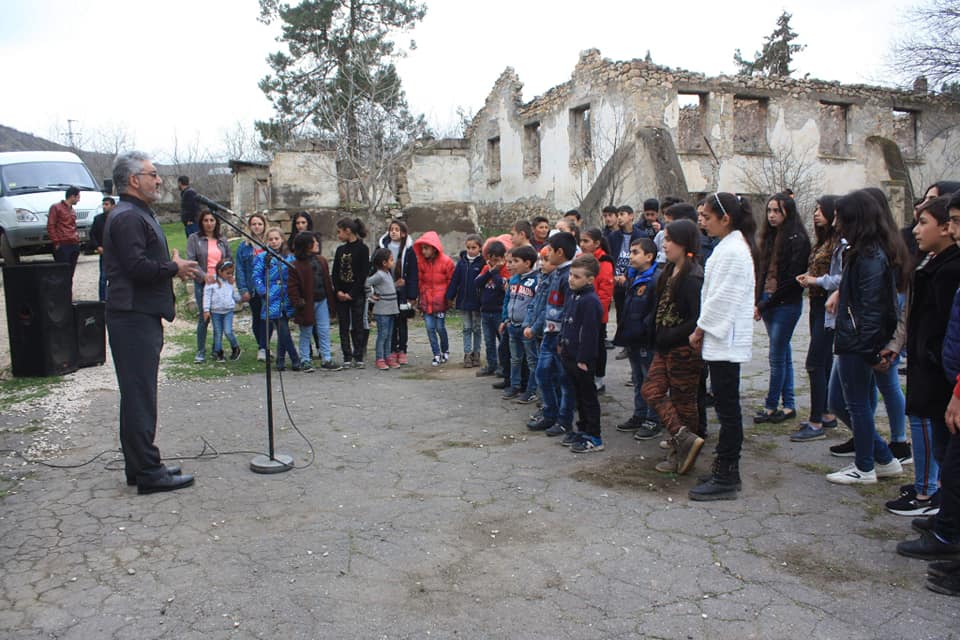 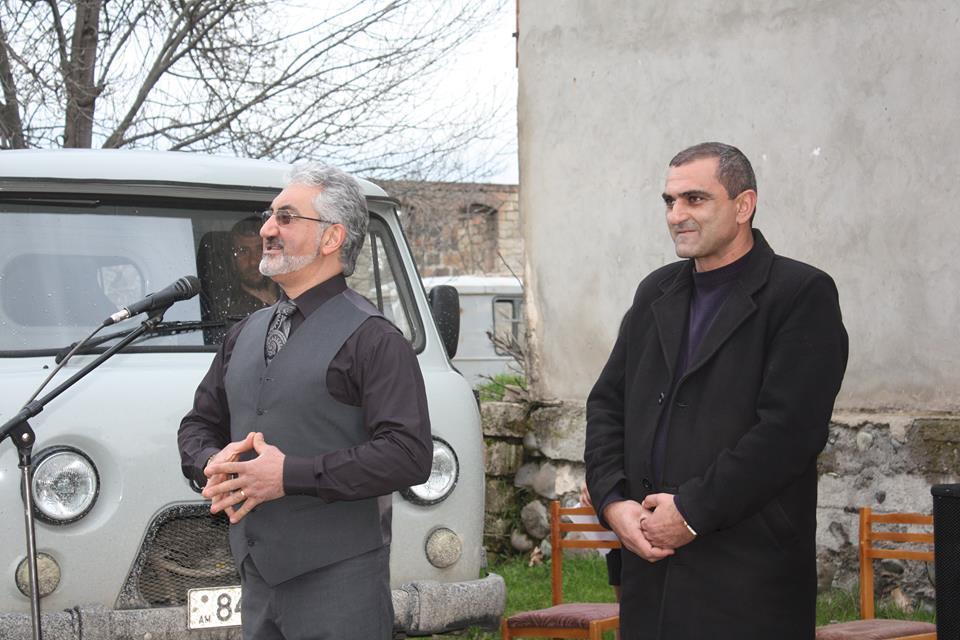