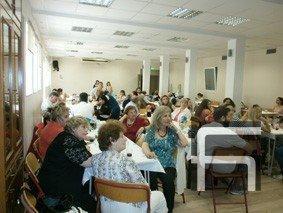 After the open meetings held in the presence of new and old members in 2014 and in April 2015, in Kokkini-Fiks, the Executive Board organized a social gathering-lunch on May 17, 2015, at "Aram Manukian" Club "Tagvor & Rosa Avedikian" Hall in Fiks.

The served lunch dishes as well as all delicious sweets were made by the Board and Hamazkayin members in general, so that to earn small proceeds from "5 euro’s entrance" fee to cover the society and administrative expenses of the newly formed Chapter and for implementing future projects.

Thus, the event was not just a simple gathering for lunch, but was combined with a nice artistic program in accord with the mission of the Hamazkayin Society. The attended members improvised and spontaneously performed dancing, solo songs, choral songs and poetry.

The honored guest of the event was Maestro Ruben Asatryan – Conductor of Philharmonic Orchestra of Armenia, which gave a concert dedicated to the Centennial of the Armenian Genocide on Saturday, May16, 2015, at "Barnasos" Hall.