In Toronto, Teachers in Armenian Literature are Celebrated 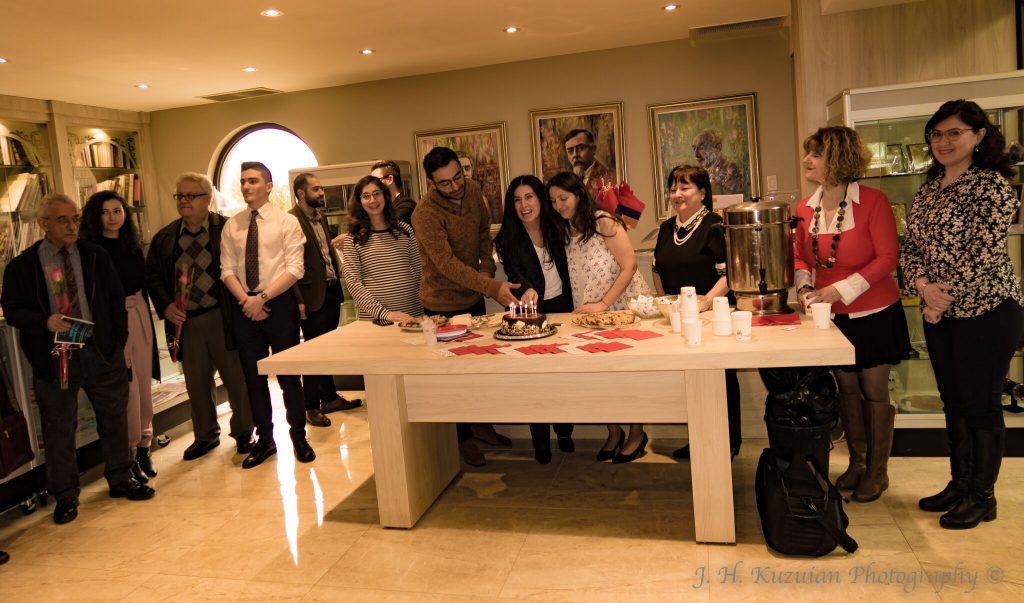 When we page through Armenian literature, we meet writers who also played a decisive role as teachers of Armenian language and mores. On March 24, 2019, the Hamazkayin Toronto “Klatsor” Chapter’s Literary Committee began the eighth year of monthly gatherings. The month’s focus was eight special authors, each a world in himself or herself.

Let us start with the 1800s. Tlgadintsi (Hovhannes Harutiunian, 1860–1915) is a name familiar only to those who delve deeply into Armenian literature. His face shows up among the portraits of literary figures lost in the Catastrophe. Armineh Torikian, in just a few minutes, summed up his contributions, from his birthplace, the village of Tlgatin (Kharpert region), to his martyrdom in 1915. He was a pedagogue, teacher, principal, author of many stories, novels, and plays that take place in the villages far from the bustling metropolis of Constantinople. They portray the suffering of Armenian villagers in the era before the genocide. He ran the St. Hagop parish school for many years. In 1887 he founded the central national (nonmissionary) school in Kharpert, which he ran until his death. His family was also martyred in the genocide. His works include “Klukhd chur tir,” “Aykiis pshenin,” “Gdage,” “Kavat me miayn,” “Jnjghugneru tadasdane,” “Im pakhds,” and “Akh Asdvadz, Asdvadz.” He also wrote the plays Vor megun yedeven? and Enti temen. Tlgadintsi’s students included the future writer Rupen Zartarian, another martyr in the genocide. Armineh read one of Tlgadintsi’s works that well represented his style.

We heard about another member of Tlgadintsi’s generation, Sibil (1863–1934), from Arda Der Hagopian. Born Zabel Asadour in the Üsküdar district of Constantinople, she was a writer of prose and poetry, a teacher, and a public figure. She taught in the provinces, then in Constantinople. She was cofounder of Azkanver Hayuhiats Engerutiun, a women’s group that set out to open schools for girls in Constantinope and especially in the provinces. She was instrumental in securing greater participation of women in public life and in protecting orphans and the needy. She was fluent in French as well as Armenian. The literary critic Hagop Oshagan wrote of her literary legacy: “Sibil’s poetry is a surprising mixture of flawless form, silken turns of phrase, apricot and foamy lacework, golden daggers, soaring scents, and eyecatching colors.” Arda gave an impressive reading of one of her poems, “Menasdanin guyse” (The girl in the convent), where Sibil’s pure, colorful and delicately woven language is clearly displayed. The novel Aghchgan me sirde (A girl’s heart) is considered her most important work. Her collection of poems Tsolker brought her wider recognition. The widely used collection of textbooks, “Tankaran” (Museum) was the result of her joint efforts with her husband Hrant Asadour. The future writer and public figure Hayganush Mark was among her students.

“In death, even the most famous person leaves behind just a name, two meager words. It’s the person’s work that stands as his or her legacy that may survive the centuries.” The name, two meager words, is Levon Shant. His legacy in letters, politics, and education are immeasurable. Born Levon Seghbosian in 1869 in Constantinople, he lost both parents at a tender age. He attended the Gevorgian Seminary in Ejmiadzin with Gomidas, studied in Europe, and taught in Constantinople, Tbilisi, Marseille, Cairo, and Beirut. An author of textbooks, a pedagogue, teacher, principal, deputy speaker of the parliament of the Republic of Armenia, a founder of the Hamazkayin Armenian Educational and Cultural Society, Shant was the main founder and for two decades principal of the Hamazkayin Djemaran in Beirut, where he also taught pedagogy and psychology.

Let us take a breath and try to understand what kind of legacy we are discussing. I am impressed by his intellect, his enthusiasm for the future, his views on life, his beliefs about human beings, his unshakeable will when it came to education. As for literature, his biggest contributions, according to Oshagan, are in theater. His plays include Shghtayvatze (The chained) and Hin Astvatzner (Old gods). This is true “even though his work is prolific enough to make a Mekhitarist monk envious,” Oshagan wrote. He avoided the events of his day, including the Catastrophe. His justification is his pursuit of a better humanity. We hear his poem, “Yes patranke siretsi” (I loved the illusion), read by Aris Chulian, a graduating senior at the Armenian Relief Society Lapoyan high school

How about the literary critic we have now cited twice? Hagop Oshagan (1883–1948) is well known as the greatest critical reader of Armenian literature. His eminence makes his work hard to grapple with. How would he critique our writing about his writing? The presenter was Daron Halajian; he had worked with Aren Mnatzakanian to prepare his talk. One of Oshagan’s students, Moushegh Ishkhan, in his book, Im Usutsichnere (My teachers), tells this story: One of Ishkhan’s classmates is secretly solving math problems while Oshagan is analyzing one of Vahan Tekeyan’s works. “Out! Quickly get out of my classroom! I stand here and analyze Tekeyan and speak of the values of Armenian language and poetry and you sit there wasting your time on trivialities! Let all the knowledge in the world go to hell. This is Armenian literature, Armenian spirit, Armenian breath, and the speaker is Oshagan. You must listen.”

Hagop Oshagan (Kufejian) was born in Bursa in northwestern Asia Minor. He began his studies at the Armash monastery school but stopped because of poverty. He became literate through self teaching and went on to serve as a critic, teacher, writer, and editor. He taught at the Melkonian school in Cyprus and the Jarankavorats monstery in Jerusalem. He published novels, Dzag-Bduge, Haji Abdullah, Mnatsortatse, and others. He edited, in ten volumes, Hamapatker Arevmdahay Kraganutian (Panorama of Western Armenian literature). He wrote innumerable analytical pieces. He died in Aleppo, where he had been invited (from Jerusalem) to mark an anniversary. He is known for his sparse style. Ishkhan wrote, “He liked and approved of everything that came from the soul, that was written in blood, that was ‘true’ and bubbling with life. He fought a war against words strung together without content.” His heroes were often humble villagers. Daron read a part of Oshagan’s work, Khonarhnere (The humble ones).

Moushegh Ishkhan studied under Levon Shant and later became Shant’s colleague. Generations of Djemaran students had Ishkhan as their Armenian teacher. His literary legacy includes plays, poems, stories, and novels. His textbook series, Arti hay kraganutyun (Modern Armenian literature), are widely used. Varak Babian summarized Ishkhan’s lie and literary characteristics. Moushegh Jenderejian was born in 1914 in Sivrihisar. His year of birth was clarified three decades later when he was reunited with his mother, from whom he had been separated on the road to exile. He wrote, “I spent the last best years of childhood in Damascus. I received a diploma from the Armenian national school. After an unsuccessful attempt to learn an artisan skill, I managed to get myself into the Melkonian school in Cyprus for two academic years, studying under Hagop Oshagan.” Oshagan had a great influence on Ishkhan. Varak read an excerpt from Ishkhan’s Im usutsichnere. Ishkhan studied pedagogy in Belgium and, until his death in 1990, remained in his position as a teacher at the Djemaran. His major works are Mnas parov, mangutiun (Farewell, childhood), Hatsi yev luysi hamar (For bread and light), Hatsi yev siro hamar (For bread and love), Sarnaranen yeladz marte (The man who came out of the freezer), Duneru yerke (The song of homes), Vosgi ashun (Golden autumn), Darabank (Suffering), and Im usutsichnere. He also served as an editor of Aztag daily. Varag fondly recalls that by the desk of his late father, Kalusd Babian, hung Ishkhan’s translation of Rudyard Kipling’s “If.” Varak read the translation for the audience.

Next up was Boghos Snabian. His roots in Musa Ler, he was nourished with the spirit of a freedom-loving Armenian, and strengthened with Mashtots’s magic; he made Armenia, Armenians, and the Armenian language his vocation, carrying on the legacy of Hagop Oshagan. He brings to bear more than six decades of experience in literature, literary criticism, editing, and education. I have had the privilege of his company in the past, in the editorial offices of Aztag in Beirut, behind the papers and manuscripts; at his home, filled with countless books. As a teacher, he has served in national schools, while also publishing literary and critical works. For 42 uninterrupted years, he has served as editor of the literary journal Pakine. He served as editor of Aztag and lecturer on Armenian literature at the Hamazkayin Higher Institute for Armenian Studies for twenty years. The author of more than 30 monographs, he had collected and edited over 80 volumes of works by great Armenian writers, including his mentor Oshagan. In short, a life lived in Armenian literature. Harutiun Berberian, a student who went on to become a colleague, wrote, “As a teacher, Boghos Snabian was able to convey his endless love, his passion for Armenian literature and the Armenian language to us. That was his greatest merit.”

“The cradle of Western Armenian literature, Constantinople, never dried out,” writes editor and intellectual Nazareth Berberian, referring to poet Zareh Khrakhuni. Rupen Janbazian prepared a presentation that is read in his absence by Aren Mnatzakanian. Khrakhuni wrote, “My biography is very simple. It can be summarized in one sentence. If we set aside the unimportant details, if we neglect the fact, say, that I was born in Yeşilköy on October 16, 1926, was baptized with the Holy Chrism in the local Saint Stepanos church font, started my studies in my village’s Kapamajian school and continued them in the Vienna Mekhitarist fathers’ Pangaltı Lycee, graduating with honors in 1945, studied law for a year and moved to the philosophy, psychology, and sociology department of the Literature Faculty, where I completed the course of studies in four years, went to Paris for the first time in 1951 to delve a bit deeper into the bottomless pit of the history of art and culture without drowning, of course . . . five years of teaching at the Esayan Lycee, and two more at the Kedronagan, succeeding in bringing forward young poets and writers rather than future megadonors….” Khrakhuni has published more than 25 volumes. He has been an active editor and translator. Aren read Khrakhuni’s poem, “Mesrobadon.” In the words of the Rober Haddejian, editor of the Istanbul newspaper Marmara, “He too was a true student of Mesrob Mashtots and paid his debt to his teacher by creating Mesrobadon.” Mashtots invented the Armenian alphabet in the fifth century of the common era.

The final presentation left us thinking whether we too have a debt to Mesrob.

At the conclusion a birthday cake for the Literary Committee was cut and enjoyed and teachers received roses. 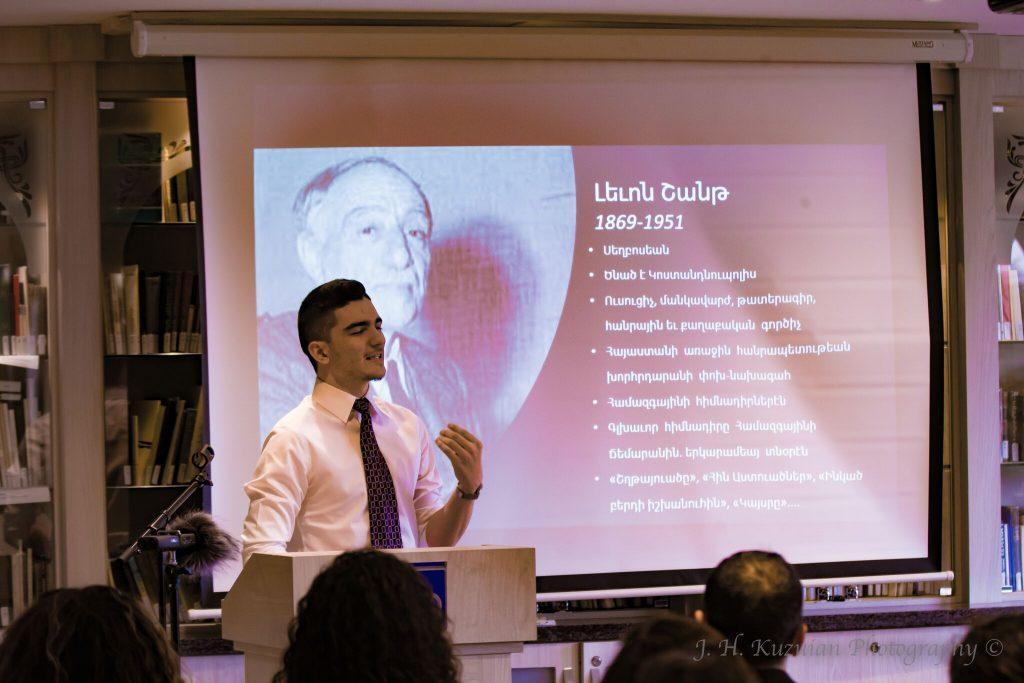 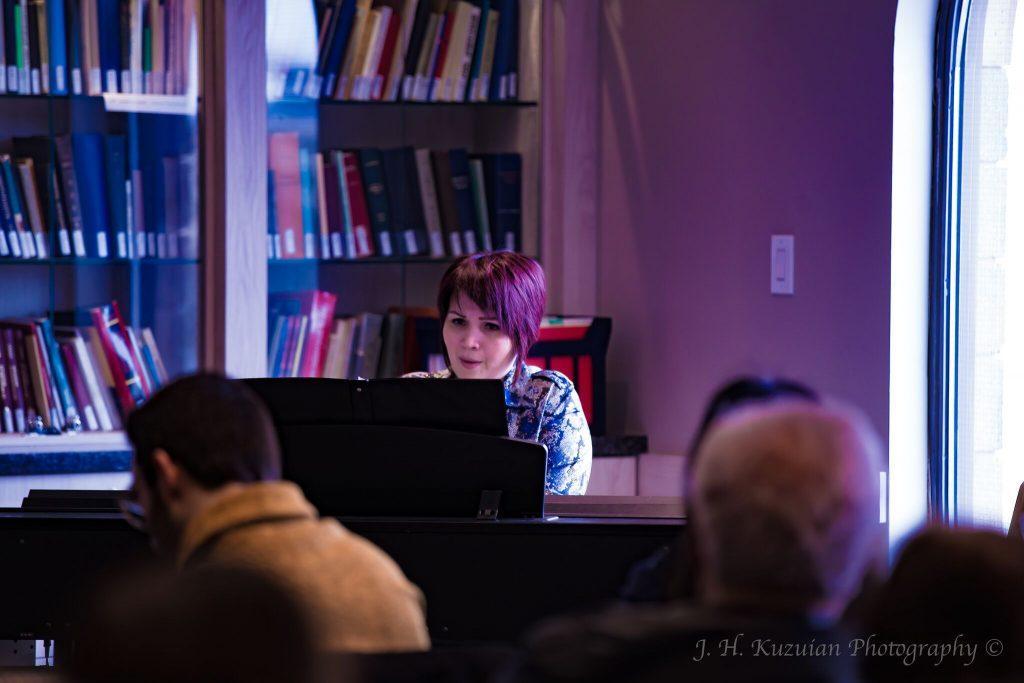 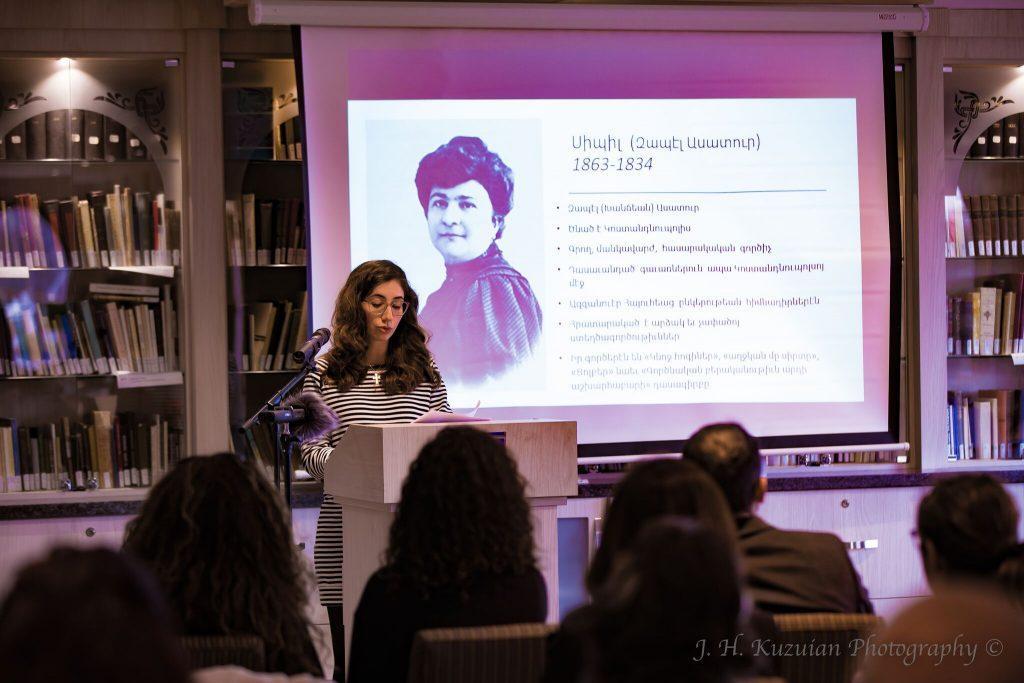 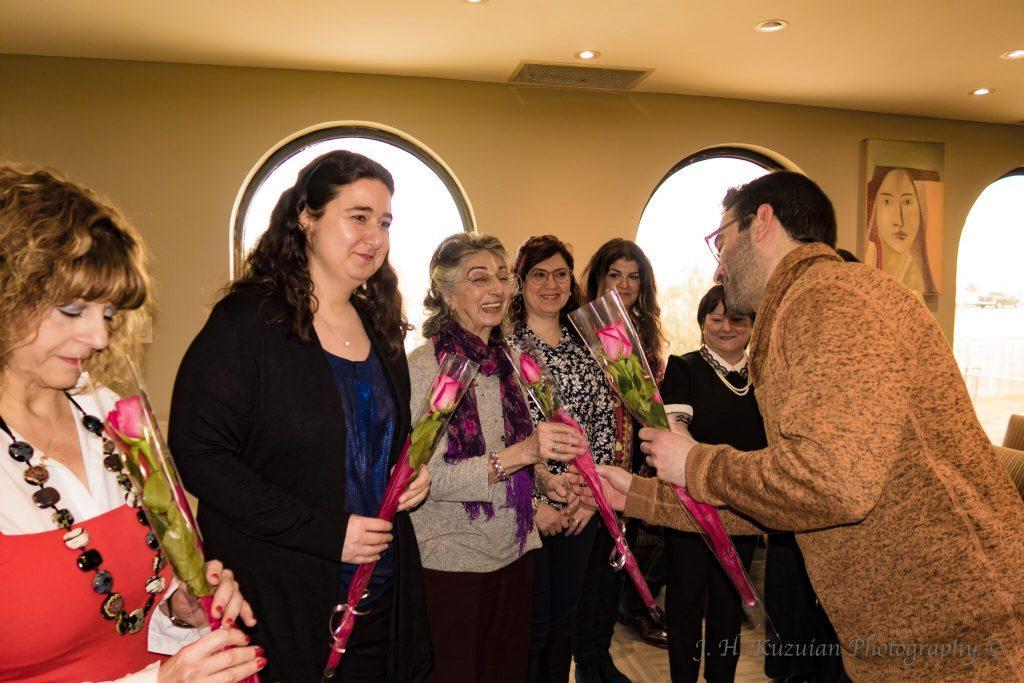 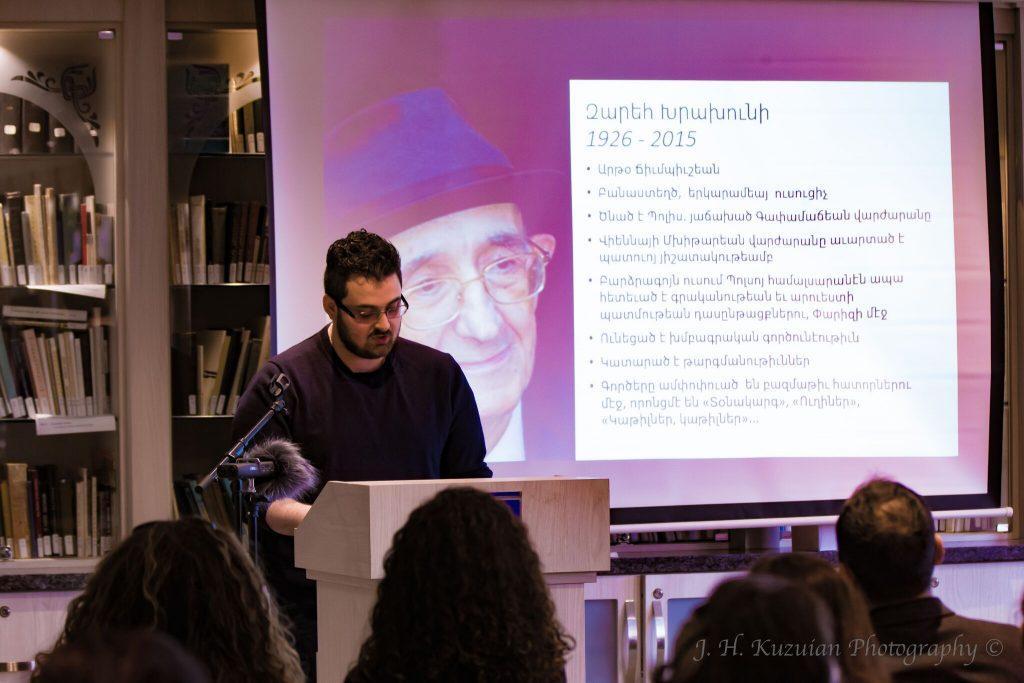 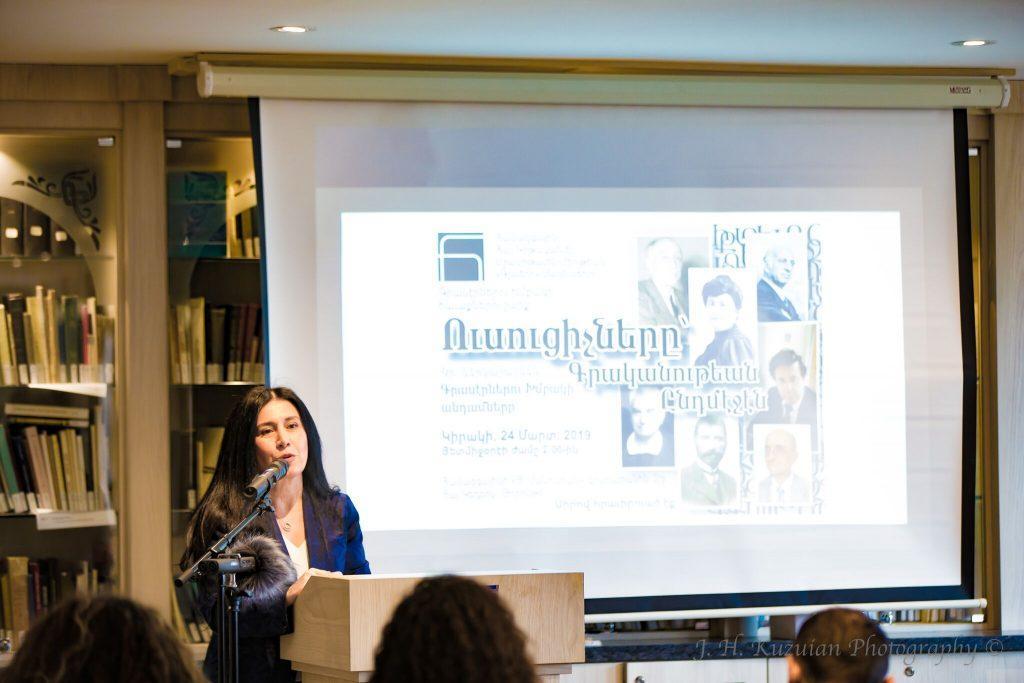 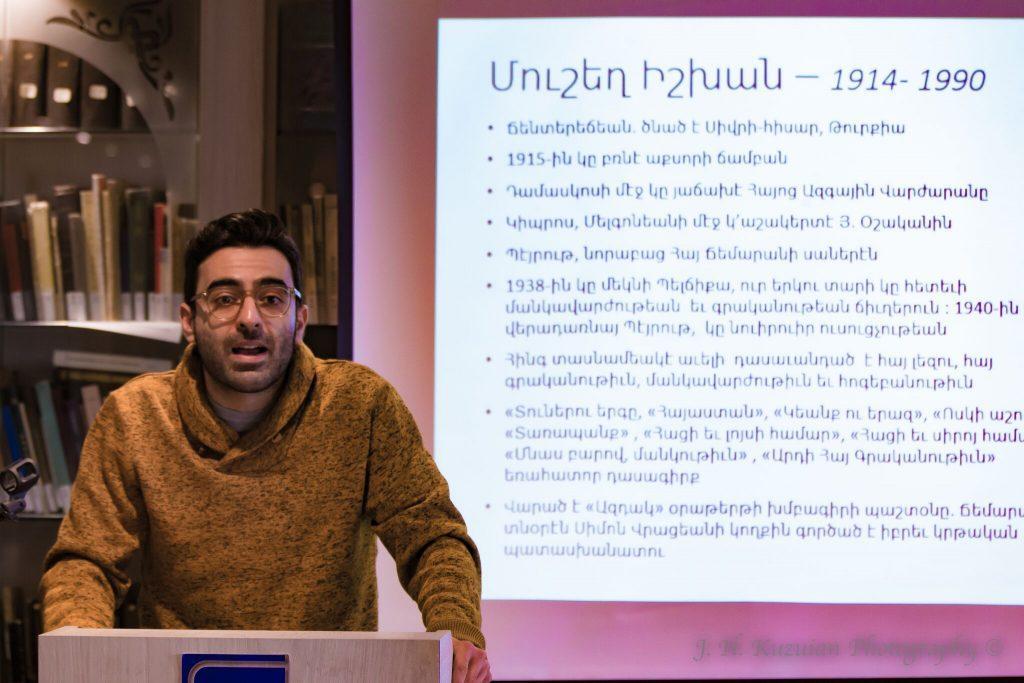 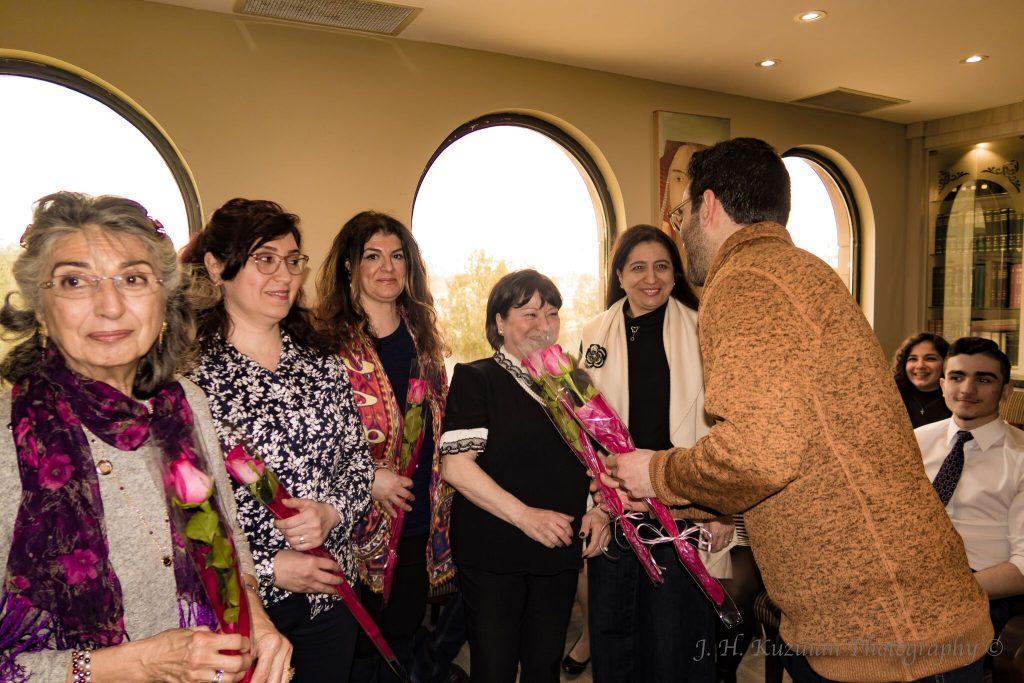 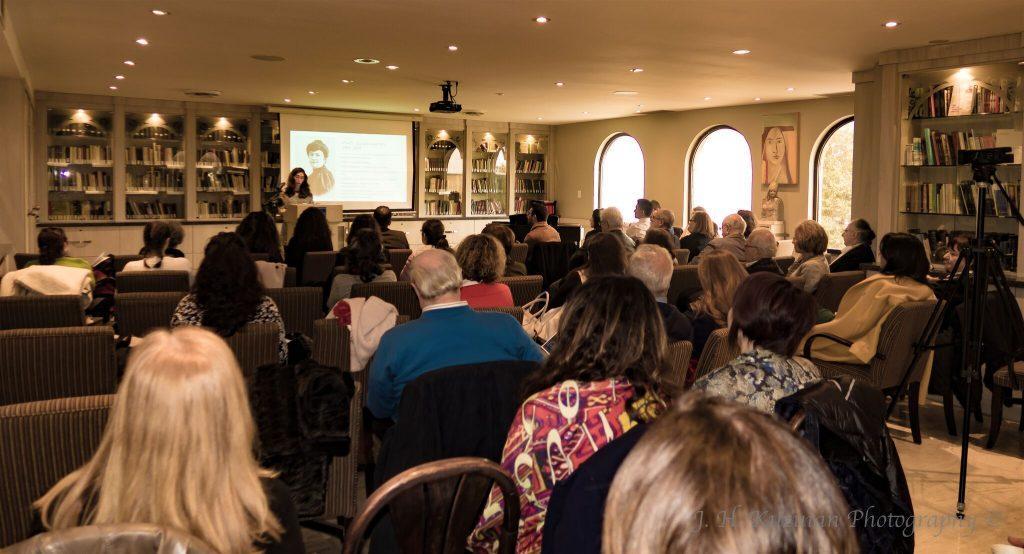 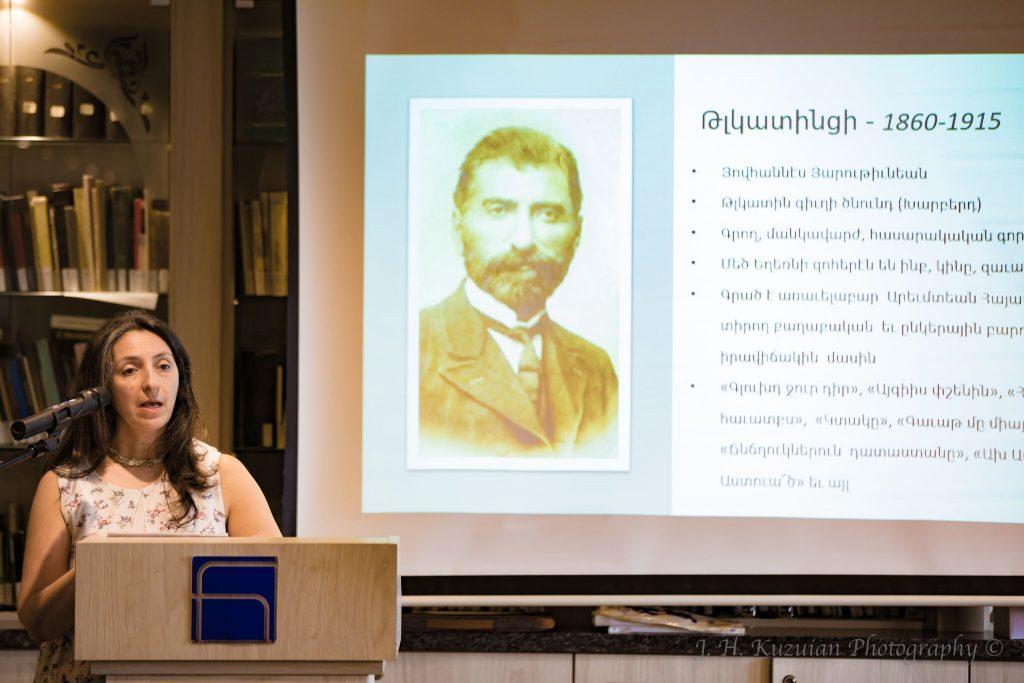 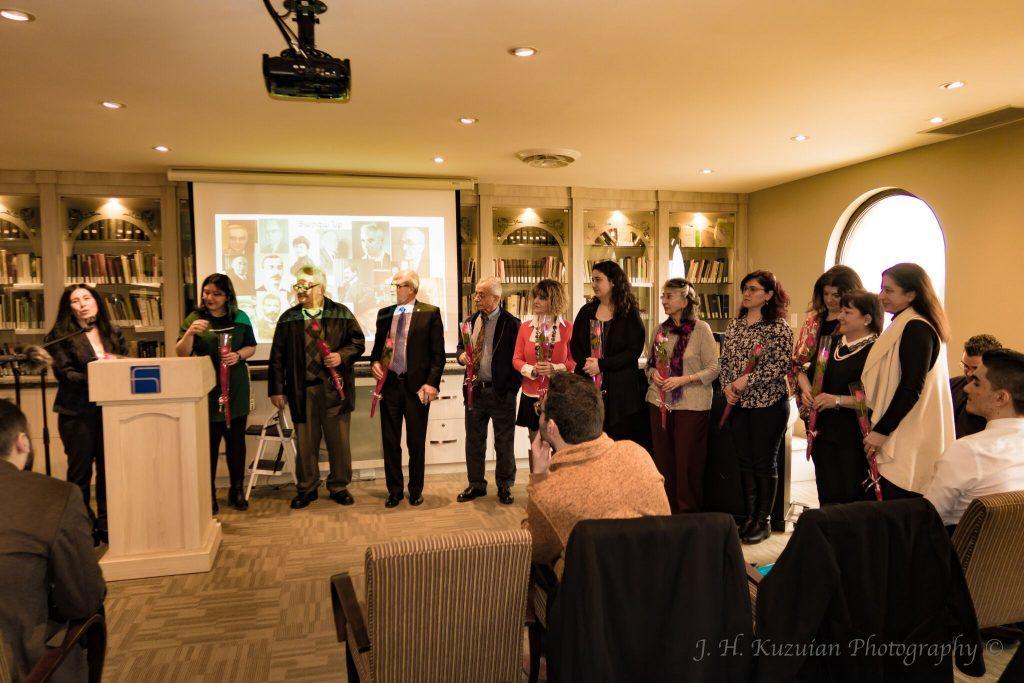 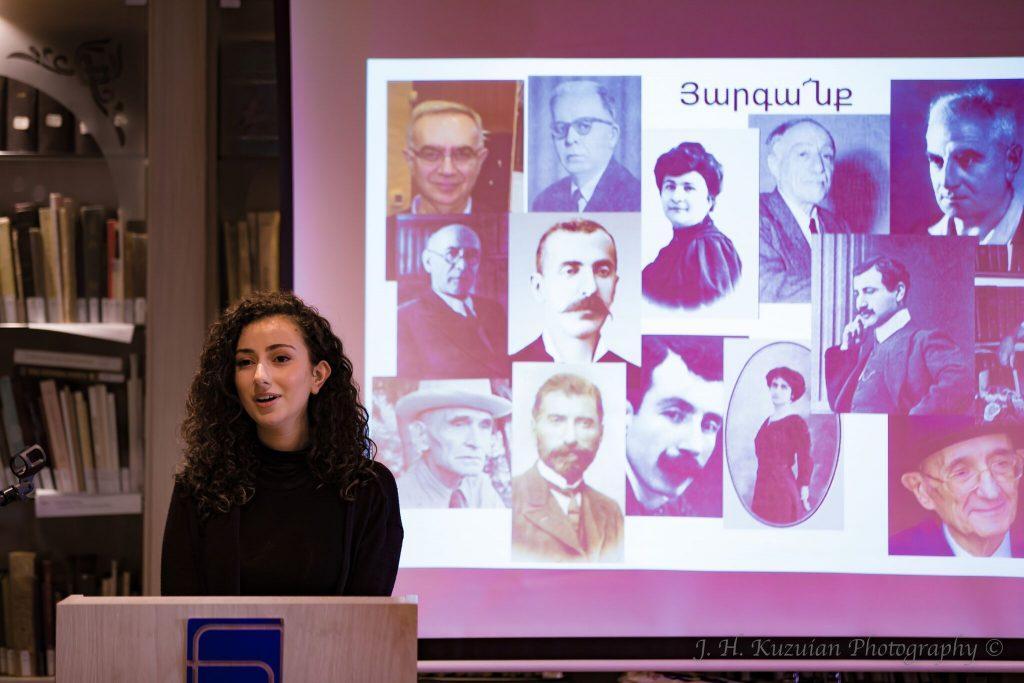 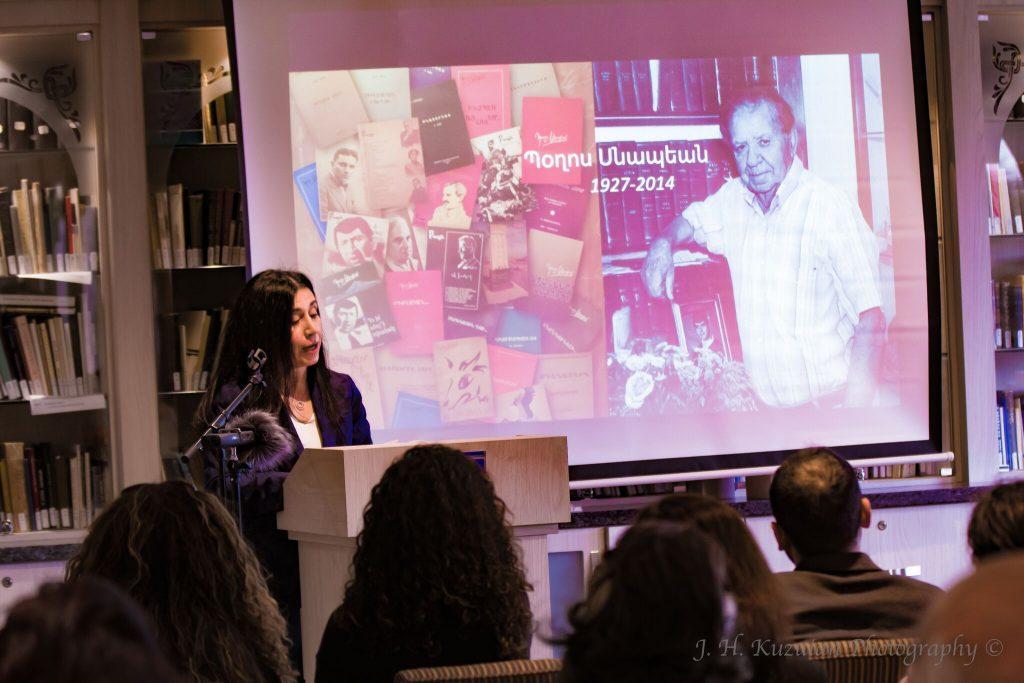 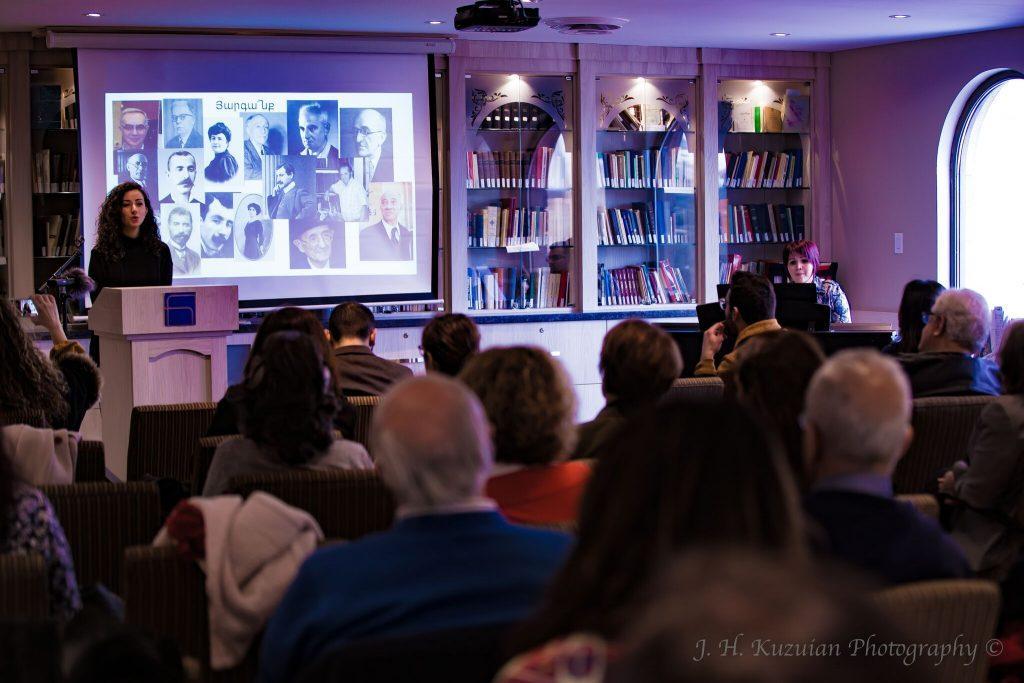 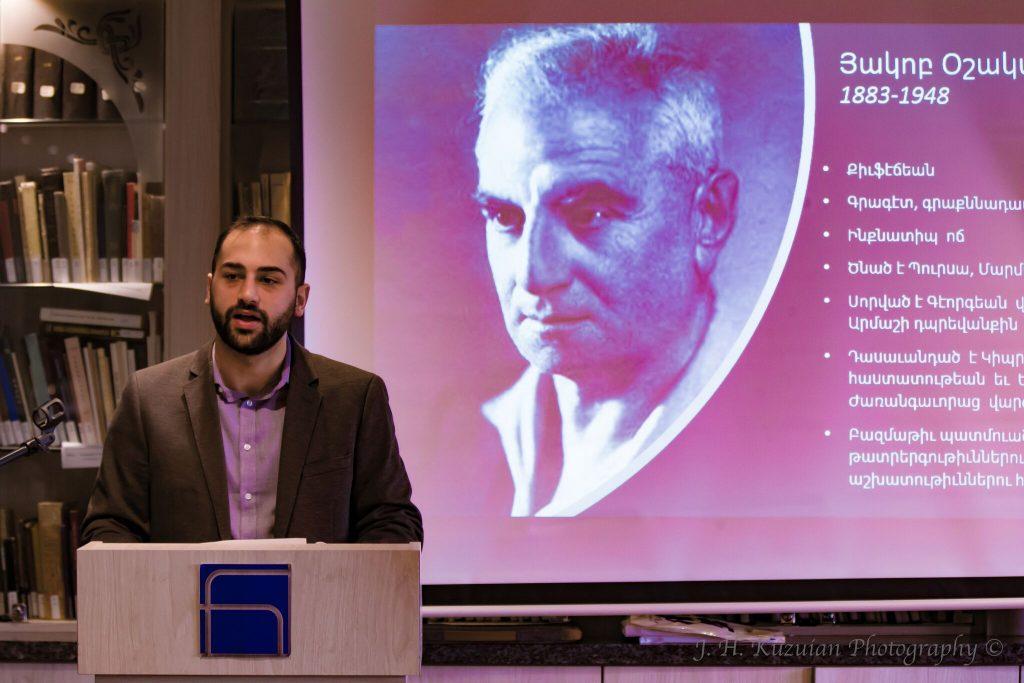 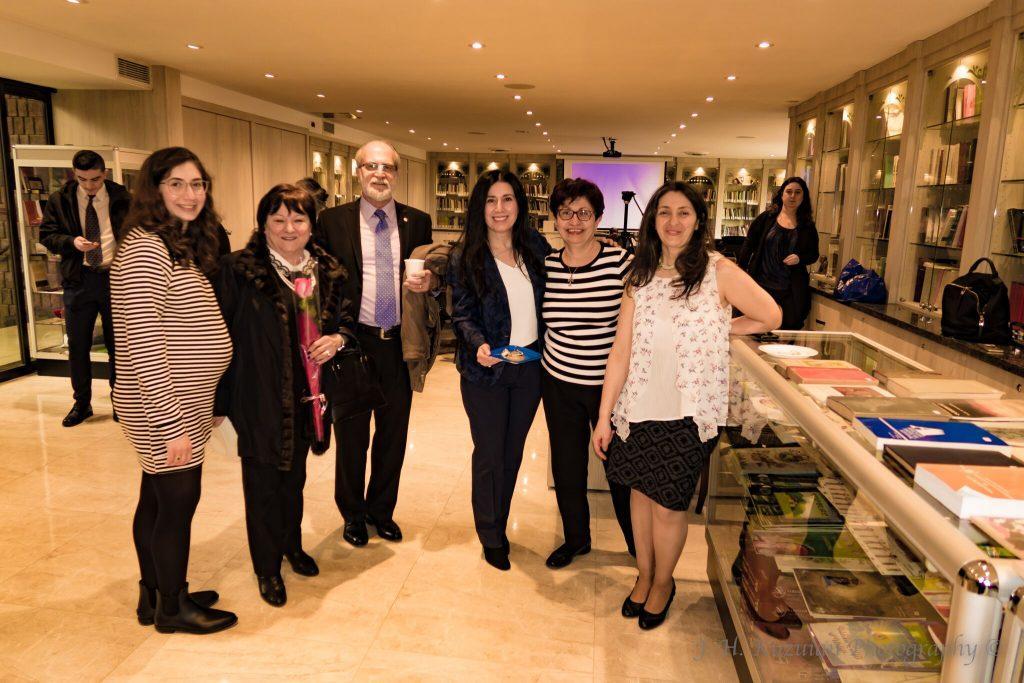