The Hamazkayin ″Kladzor″ Chapter's  Book Distributor Committee had invited Karnig Panian's daughter Houri Panian Boyamian from Boston to take part in the event. Houri Panian and her sister Shaghik were the initiators of the translation and publication of the book at the reputable Stanford University Press Publishing House.

The host of the event was ARS Daily School Deputy Principal and Head of ″Sara Corning Genocide Studies″, Raffi Sarkissian. In his preface, Raffi Sarkissian talked about the difficult responsibility assumed by the orphaned generation to survive, preserve the native language and culture, and to create a stable basis for establishing diaspora. Due to such efforts, the Armenian identity, cause, and claims are never forgotten. They have even become more powerful. Raffi Sarkissian noted in his speech the importance of such memoirs, because our history and collective experience are based on personal individual experiences of survivors, which convey the true face of the genocide, its effects, pains, and losses.

Then, Raffi Sarkissian presented Karnig Panian’s brief biography. Panian was born in Dzakh Dzor Village of Koryun district in Sebastia. He was five when his family was subject to exodus, and the boy orphaned on the desert road. Djemal Pasha organized the relocation of hundreds of thousands of Armenian orphans to Antoura where they were subject to the terrible danger of Turkification. The little boy was one of them. When he finally left that hell, he appeared in the Armenian orphanage of Jbeil. There he learned the craft, and then entered Djemaran. In 1935, he was one of the first alumni of Djemaran. Panian worked as a mentor, wrote books, and became the vice-director of Hamazkayin Nshan Palandjian Djemaran. He was a founding member of the Alumni Association and editor of Agos Official. Panian was also an active member of Hamazkayin and Chair of National Authority. He made a great contribution to the activities of National Parliamentarians. In other words, he was a person worthy of his nation.

His student Vazgen Terzian recounted episodes from school years and spoke about the  role of Djemaran in the formation of national consciousness.

Levon Tanayan participated in the event playing two songs on the piano. Two students from ARS Daily School read excerpts from the book.  Mher  Grachian read an extract about Panian's birthplace, where he spent the first five years of his family life in a warm and comfortable atmosphere. The author amazingly remembered all the details of their life, the scent, care and nature of his childhood. Araz Fr. Ohan read another part from the book, the contents of which was quite different from the previous ones. Here the hunger made Armenian orphans eat insects and drink ink, which brought to lethal "falakhas" and caused inhuman attitude towards them.

Sarkissian invited Houri Panian Boyamian to speak. Houri Panian is the principal of  St. Stepanos School at Watertown. She has been working there since 1988. Houri Panian was awarded the Mesrop Mashtots Medal by Aram I Catholicos of the Great House of Cilicia and the Queen Zabel Medal by the US Eastern National Prelacy. Wishing to contribute to education in the best way, she returned to University and received her Master's  degree in education. Due to her efforts, St. Stepanos School has become the first Armenian highly qualified school among the independent schools of New England. In other words, she serves the education in the best way and with great dedication like his father.

In her speech, Houri Panian Boyamian explained the three main reasons, which made her initiate the translation of the book into English. First, very few people know about the Turkification of Armenian children. The translated book will be helpful for wider Armenian and foreign readers, historians and especially for specialists making researches on Armenian Genocide. Second, the book will contribute to the Armenian Cause and Armenian claims,  and the third, to commemorate the Armenian orphans on the Centennial of the Armenian Genocide, their struggle and sacrifice for the preservation of their identity and roots and for establishing a huge diaspora.

During the evening, very important and historical photos were displayed on the screen, such as Djemal Pasha’s visit to orphanage, the first graduates, and teachers of Djemaran, the meeting of National Council in Jerusalem with two Catholicoses, the newly built cross-stone monument for unburried orphans of Antoura etc.

Toward the end of the event, the organizing committee chair Garo Akinian presented the book ″From the Red Desert to Jerusalem″ to Houri Panian Boyamian as a souvenir. The former students of Djemaran, the genocide survivors’ children and grandchildren surrounded the guest.

The Committee served coffee, cookies, and fruits to 100 guests.

Translator Simon Beojekian's meticulous work is worth appreciation. The book is available in English and Armenian at Hamazkayin "Y. Manoogian" Library. 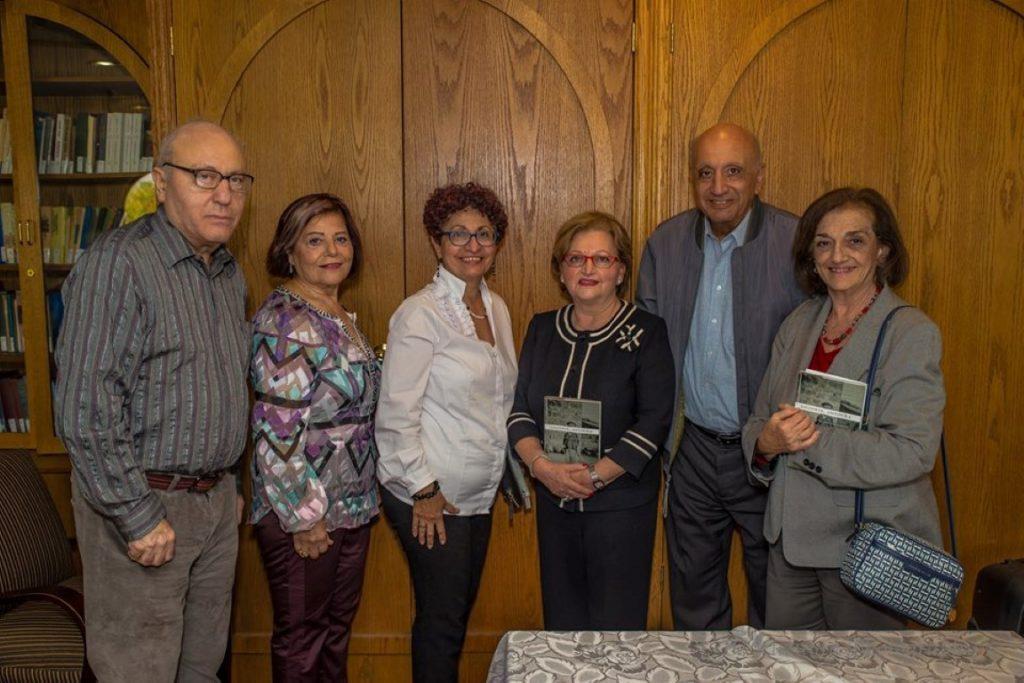