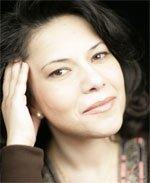 Anna Mayilian was born in Yerevan, Armenia. After studying in the Piano Department at the Music School N 20, she studied in the Vocal Department at the Romanos Melikian Music College in Tamara Hampartsumians class. Upon graduation, she studied in the Gomidas State Conservatory’s Vocal Department in Yerevan and received her post-graduate vocal education in Prof. Anna Sarajevas class. She specialized in vocal performance at the European Mozart Academy in Poland, at the Villecroze Academy in France, and at the Hariklea Darklee Academy in Romania. She studied with notable instructors such as Prof. Kerstin Mayer (Sweden), Prof. Eva Blahova (Czech Republic), Prof. Anna Reynolds (Germany), Prof. Marianna Nicolesco (Romania), Carol Smith (Switzerland) and Arax Davtian (Armenia). Anna Mayilian has received numerous medals in national and international vocal competitions. Since 1995, Mayilian is a soloist of the Cathedral Church of Kotayk Diocese. She teaches in the Classic Vocal Faculty at Gomidas State Conservatory since 1998. Anna Mayilian is the founder and the artistic director of the Ethno Vocal Trio of traditional and sacred music. In 2003, Mayilian received a gold medal from the Armenian Ministry of Culture. On the 28th of June, 2008, Anna Mayilian was conferred with the title of “Honored Artist of the Republic of Armenia” by the order of the Armenian President. In 2010, she was conferred with the title of Docent of the Gomidas State Conservatory. Since 1992, she has undertaken numerous concert tours in Armenia and abroad. The repertoire of Anna Mayilian includes numerous musical compositions of different genres. She stands out for her original interpretation of songs and for her dramatic stage presence. Mayilian enjoys performing various genres of singing, but she mainly focuses on Armenian music (folk and sacred songs, romances, classic and modern vocal music).