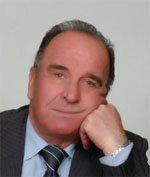 Kevork (George) Apelian, famous as Tsiounagan for his chronicles and articles full of good humor, was born in Keorkuna, one of the villages of Kessab, in 1941. He received his primary education at the Armenian Evangelical Schools of his native village and then in Ainjar. Afterward, he pursued higher education at Haigazian University. He has been an educator and a teacher for nearly 25 years. Afterward, he established in Ainjar his own stationary company, SAVA. He was an active participant in the political party, the church and the local cultural life. He took various responsibilities at the Garmir Ler Committee of ARF in Ainjar, besides being a member of Hamazkayin and the Board of Trustees of the Armenian Community Sanatorium in Azounieh. Since his school years, he took to writing and has contributed to “Spurk” Magazine published by S. Simonian, “Pakin” Literary Magazine, Aztag daily, “Badanegan Artsakank” Monthly, to mention some. He carried out a consistent work of collecting stories and eyewitness accounts of Armenian Genocide survivors, and of Armenians who have lost their identity and have become Muslims. He published his stories in two volumes. Among his published work are “Hele, Hele, Hele Kessab,” “Anna harse” (“Anna the bride,” a novel,) “Tsgians nahadagoutioun” (“Martyrdom for life, published also in Arabic and Spanish,) “Beirut,” “Nedenk prnenk” (“Let’s throw and catch,”) “Aparig, apig m chour…” (“Little brother, give me a sip of water…,” the second volume of the book “Martyrdom for life,”) “Macaroni tileg-tileg,” and “Kouirigs mi dzakher Mom” (“Don’t sell my sister, Mom,” from “Martyrdom for life.”)