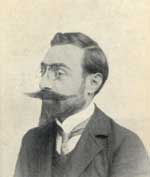 Levon Shant, whose real name was Levon Seghposian (Nahashbedian), was born in Istanbul in 1896. He completed primary education at the Kevorkian Seminary of Echmiadzin, and higher education in Germany and Switzerland. He was a teacher and an educator for many years, and active in both public and political life in Armenia and various communities in the diaspora. He was the vice chairperson of the Parliament of the First Republic of Armenia, as well as one of the founders of Hamazkayin Armenian Educational and Cultural Association, and one of the chief founders of the Lyceum (Djemaran) of Hamazkayin in Beirut. For 20 years he was the principle of Djemaran, where at the same time he also taught education and psychology. He passed away November 29, 1951. One of the greatest Armenian playwrights of the 20th century, Levon Shant wrote several plays, including “Oshin Bail,” “Ingadz perti ishkhanouhin” (“Princess of the fallen fortress”,) “Hin Asdvadzner” (“Ancient gods”,) “Gaiser,” (“Caesar”,) and “Shghtayvadze” (“The enchained”.) He is also the author of sociological and political studies. Levon Shant lived a life full of valuable creations.