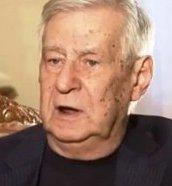 The writer, playwright, publicist and translator Berj Zeytuntsyan was born in 1938,  in Alexandria, Egypt. He was one of the repatriates of 1948. Zeytuntsyan graduated from the Ghazaros Aghayan secondary school in Yerevan, and in 1963,  he graduated from the High Foreign Language  College of Pyatigorsk.  From 1963 to 1964 he was trained in Moscow High School of Dramaturgy. From 1965 to 1968,  Zeytuntsyan was the editor of the Hayfilm studio, then, in 1965-1975, the chief editor of the Yerevan Film Studio. Later, in 1975-1986, he was the secretary of the Union of Writers of Armenia. Berj Zeytuntsyan was the first Minister of Culture of Armenia in 1991-1992.

Berj Zeytuntsyan was the author of 12 plays, staged in Yerevan’s theaters. His books have been translated into 11 languages, including Russian, English, French, and Arabic.

Berj Zeytuntsyan  twice became a laureate of State Prize. He was Honored Figure of Culture, Honorary Member of the Rome Tiberina Academy of Arts and Social Sciences.  In 2007, he received the Order of St. Sahak-Saint Mesrop of the Armenian Apostolic Church, the title of Armenian Art Knight, as well as the title of Honorable Citizen of Yerevan.