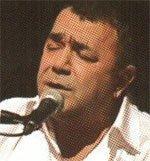 Roupen Hakhverdyan was born in 1950, in Yerevan. He worked at the Yerevan Television Station as assistant to the director. In 1975, he graduated from Yerevan Theater University, specializing in theater and television directing. Through his own efforts, he mastered poetry and music, thus becoming a songwriter and creating a new genre of Armenian songs, auteur songs. He is considered the father of the Armenian auteur songs and soon had many who followed in his style. He as also nurtured by the political and folk songs of 1960s. He was the author and director of several musicals, the most popular of which is “Sadanayi chraghatse.” He also wrote hundreds of songs, among which are several songs written for children’s cartoons. Until 1988, Roupen’s songs were officially forbidden in Soviet Armenia, however, his songs and work had a major impact, particularly in the struggle for freedom in Nagorno Karabagh, when Armenian freedom fighters were heading toward the front lines. Roupen encouraged the Armenian youth with his guitar and his songs, sang for the freedom of the fatherland, criticized the authorities, and called for the liberation of political prisoners. Roupen Hakhverdyan has also released on CD his complete children’s songs, thus preserving his art for new generations.