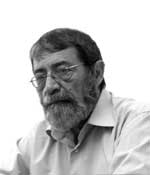 Prose writer Ruben Hosvepian was born in 1939 in Yerevan. He graduated from the Geological Faculty of Yerevan State University, as well as the Highest Training of Screenwriters and Film Directors in Moscow. As a geologist, he worked in Turkmenistan and in Armenia. He is the author of many books. His novel, “Vordan Karmir,” published in 1980, received the Derenik Demirjian Award. The novel, “Under the apricot trees,” received the RA Presidential Award in 2006. In 2009, he received the Movses Khorenatsi award and the title of Honorary Citizen of Armavir City. Hovsepian’s books and short stories have been translated into many languages. He has written the scripts for the films “Hndzan,” “Khntsori aikin,” “Garod,” “Abril,” “Amenadak yerkire.” He has translated the novels “One hundred years of solitude” and “The autumn of the patriarch,” by Gabriel Garcia Marquez into Armenian, as well as the first two parts of the trilogy titled “Childhood, Adolescence, Youth,” by Leo Tolstoy. Ruben Hovsepian has been a Member of Parliament of the second and third Assemblies of the RA National Assembly. Presently, he is the editor-in-chief of the ARF organ, “Droshak,” and the director of “Nork” literary publication.