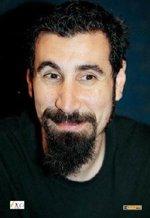 Serj Tankian (born August 21, 1967 in Beirut, Lebanon) is an Armenian-American singer. He started as a singer in the alternative metal band System of a Down and after they went on hiatus he continued his career as a solo artist and producer. He is known for his gritty yet wide vocal range. His solo output mixes various styles and genres, including metal, rock and Armenian musical motifs. At age seven, Serj Tankian moved with his parents to Los Angeles, California at the beginning of the civil war in Lebanon. After high school, he studied marketing. He took singing lessons for four years and also took guitar lessons as a young child. In 1993, he founded the band Soil with Daron Malakian, which later went on hiatus, and later changed to System of a Down. Tankian is not only a member of the band System of a Down, but also has his own record label which is called Serjical Strike Records, a sub-division of Columbia Records. He also performed guest vocals on songs such as Mushroom Cult by Dog Fashion Disco, and Mein by Deftones. He produced “Enter The Chicken” by Buckethead, and provided vocals to the Buckethead songs “We are One,” “Coma” and “Waiting Here.” With Serjical Strike Records, he endeavors to offer those musicians often ignored by the mainstream a possibility to release their music and be heard. The first release of Serj’s new label was Serart, a project consisting of Tankian, himself, and Arto Tunçboyaçiyan, an Armenian friend of Tankian’s. Tankian is also very involved politically. Together with Tom Morello (ex-Audioslave, Rage Against the Machine, The Nightwatchman), he founded the organization Axis Of Justice. Tankian often speaks publicly against violence and injustice in the world. Tankian’s first poetry book, Cool Gardens, was published by MTV Books and released on October 1st, 2002. It is a collection of seven to eight years of Tankian’s reflections on life, and features artwork by fellow Armenian, Sako Shahinian. The book has received much praise in the artistic community. In late 2007, Serj released his first solo album “Elect the Dead”