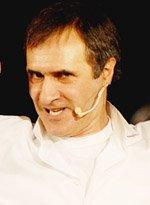 Vardan Petrosyan was born in Yerevan, on February 27, 1959. In 1983, he graduated from the Product Design Department of the Yerevan Arts and Theater Institute. From 1983-85, he served in the Soviet Army. In 1985, he founded “Young hedgehogs” (“Yeridasart vozniner,”) a youth theater group affiliated with the weekly “Hedgehog” (“Vozni.”) After 1988, the theater group was called Theater Hedgehogs. From 1988-1992, Vartan Petrosyan wrote and directed around a dozen performances, which with their political courage and performance style stirred a great deal of local attention and interest. In 1990, Vardan Petrosyan and the Hedgehog Theater were invited to Paris, where they presented “TV gags: The hedgehogs are laughing.” Since 1992, Vardan Petrosyan has been living and working in Paris, where he is performing his auteur shows in Armenian and in French. Starting in 1997 Vardan Petrosyan has been touring with performance shows outside the borders of Armenia, in the United States, France, England, Canada, Belgium, Iran, Syria, Lebanon, Russia, Cyprus and others. Vardan Petrosyan’s complete works are featured on the website www.vardanpetrosyan.com.