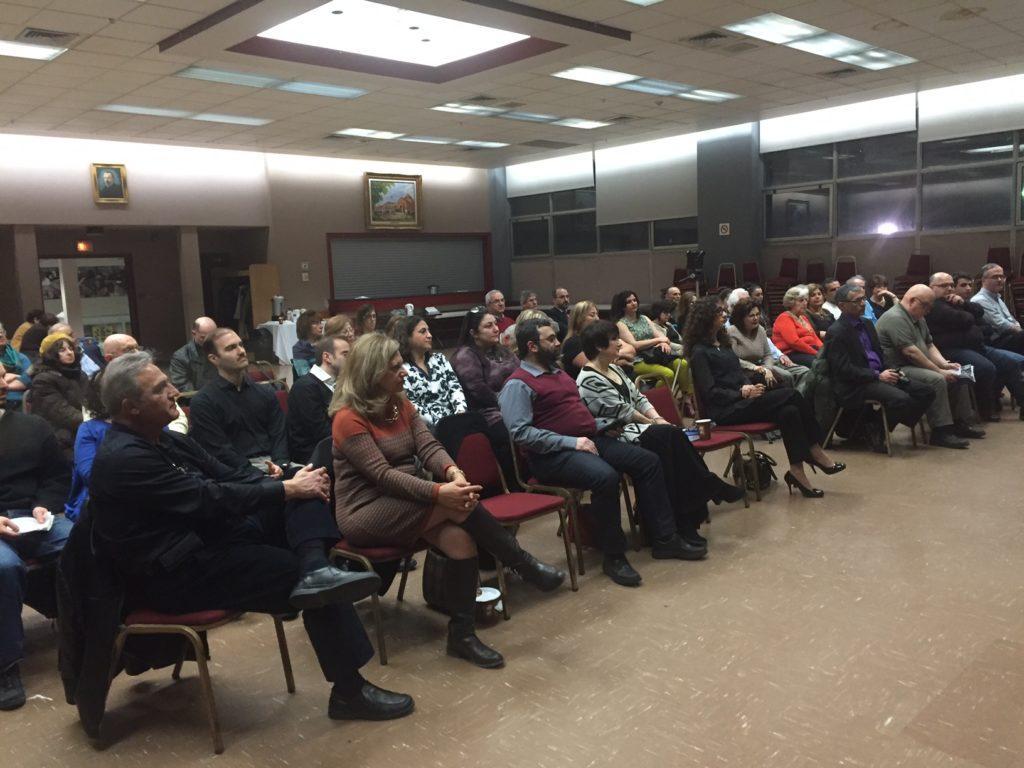 The presentation of Anush Aknerian's book "Start", organized by the Literary Committee of "Sanahin" Chapter of Hamazkayin Montreal and "Horizon" Weekly, took place on Thursday 31 March 2016, at 8: 00 pm, at "Avedis Aharonian" Hall of Montreal's Armenian Center. We are pleased to inform that this first event was boradcasted live and had more than seventy followers.

The representative of the Literary Committee Anahit Balian delivered the opening speech and said that among our daily concerns, we have our national concerns related to the survival of our national identity and the people's carelessness towards the Armenian language both in homeland and the Diaspora.

She mentioned that the Armenian intellectuals,  in different periods of our history, alerted people about those dangers, but we were recently shocked when the UNESCO declared the Western Armenian language as one of the "endangered languages". Of course, some measures have been taken in that matter and still they are being taken to avoid this danger, but still we can reach solution of that problem if new poets, novelists and scholars will appear. They will attract the new generation towards our language and literature with their new creations and will rejuvenate our ancient language.

In this sense, Anush Aknerian's book is a successful example and the Hamazkayin Armenian Educational and Cultural Society believes that we badly need writers like Anush Aknerian, who are able to enrich our native language through their creations.

The book consists of a bunch of wonderful poems where the reader finds nicely expressed feelings and thoughts, love and outburst of emotions expressed in a pure style, simple and understandable language.

"Once I hear my name

In the silence of your lips,

Stars will gush from clouds

Shrouding my tired face with light. "

Anush Aknerian is specialized in literature. She has finished a course of philosophy of language at MgKil University. Besides poetry, she writes articles and translates them for literary magazines of the Diaspora and Armenia. She is the publisher and Editor in Chief of the bilingual "Corridor Books" Publishing House. Anush was the Executive Board Member of the Hamazkayin "Sanahin" Chapter, and then, for five years she successively was the Executive Board Secretary of Hamazkayin Canada. She participated in the founding of the "Horizon" Magazine, working as an assistant editor, and now, she is one of the editors working for the "Horizon" Literary Supplement. She has resettled in Montreal from Beirut and lives with her husband Vartkes Melkonian.

As the event was organized by both Hamazkayin and "Horizon" Weekly, the conductor  invited Editor of "Horizon" Literary Supplement, Viken Abrahamian to make a speech. In his speech, Abrahamian remembered how 30 years ago, when he started to work for "Horizon", Anush Aknerian became a kind of a teacher for him.

After Comrade Abrahamian's speech, an old friend of Anush Aknerian, one of the prominent figures in the political and educational circles of the Armenian community in Canada, Armenian History teacher in St. Hagop Armenian School and finally a very dear person, Mher Karakashian came to the stage to present the book "Start".

Then, Anahit Balian invited the author Anush Aknerian to present a bouquet of her poems and to deliver her heartfelt speech. The author spoke and expressed her feelings in an enchanting voice and attracted the attention of the audience towards her creations while presenting pictures related to each of her poem on the screen. In her speech, Anush Aknerian thanked her parents that seeded in her the love and care towards the Armenian language and literature. She also thanked the organizers of the event and added, "... a writer should write either in his native language or in another.

Being a writer, he cannot fail doing it. He should create wherever he is accepted.  If there is Armenian society, which cares for literature and encourages its writers financially and morally, then the Armenian literature will surely prosper and develop. However, if there is no such society encouraging the artists and writers, then they will make another choice.

I cannot believe that there is any popular Armenian writer with good knowledge of language, which writes in a foreign language or contributes to the development of a foreign literature. Having Armenian literature requires an Armenian reader.

Then, Anahit Balian made her concluding speech. She recited some lines from Aknerian’s poems.

"Where is the rumble of my voice that was called to move mountains?"

Balian turned to the author saying, "Dear Anush, with your voice and our joint efforts, we will certainly move mountains, and, we hope that it will give birth to a new generation of Armenian poets."

Anahit Balian expressed her respect and gratitude to Anush Aknerian in the name of the Executive Board of the Hamazkayin "Sanahin" Chapter for giving birth to such a wonderful book, to Mher Karakashian and to all those who believe in the importance of the Armenian language and literature,  to the literary editorial staff of the "Horizon" Weekly and to Viken Aprahamian.

She also expressed gratitude to the book lover audience for their presence and interest towards the Armenian culture and for encouraging the Armenian literature and Armenian values.

At the end the guests enjoyed the reception, congratulated the author, which signed the books for them.